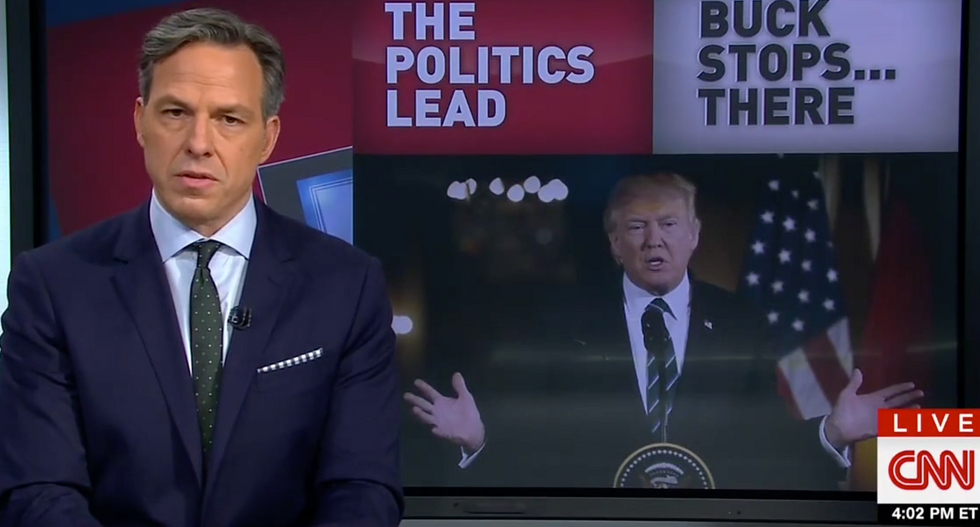 CNN’s Jake Tapper on Friday issued a brutal takedown of Donald Trump’s claim that Barack Obama wiretapped Trump Tower during the 2016 election, arguing the White House is “damn sure” not defending national security or American credibility with his unrelenting accusation.

At a press conference with German Chancellor Angela Merkel on Friday, Trump deflected culpability for his administrations’ accusation, blaming Fox News for the falsehood (Fox has since clarified that the network has no evidence, of any kind, that Trump was surveilled in any way).

Tapper eviscerated Trump for “making it very clear once again the buck stops… there” by “refusing to acknowledge” his administration caused an “international dust-up” with its “sketchy” citation of such a dubious claim—a claim that was even debunked by the GCHQ in a rare statement Thursday.

“The president’s response to this embarrassment today?” Tapper asked, playing the clip of Trump passing the blame to Fox News.

“The White House apparently unaware that when the White House … cites a news story as proof of what the President of the United State has said, that tends to suggest to people that you think you believe the story you’re citing as proof,” the CNN host said.

“In a fevered effort to try to force this outlandish claim to something remotely resembling, passively, perhaps, maybe, the truth, the White House appears actually willing to repeat another wild accusation that potentially could alienate our nation’s most important ally,” he continued.

“What is the White House defending here?” Tapper asked. “Because it damn sure isn’t national security, or American credibility before the world.”