Jerry Springer trashes Trump's insatiable need to see his name in the tabloids: 'It's like a drug for him' 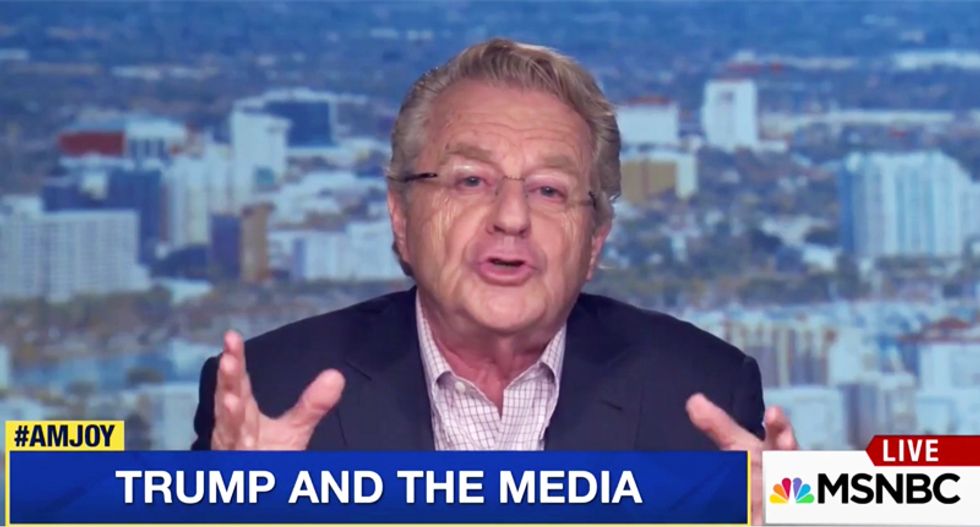 Commentator Jerry Springer accused PresidentDonald Trump of trying to delegitimize traditional media outlets because he loves to see his name in his preferred favorite tabloids because they always give him spectacular coverage.

Appearing on MSNBC's AMJoy, the former TV host told host Joy Reid that there is a method to Trump's madness when it comes to calling media giants like CNN and the New York Times "fake news."

According to Springer, Trump's need for adulation runs alongside White House adviser Steve Bannon's desire to destroy the mainstream media and replace it with sites like Breitbart.

"Bannon has a philosophical goal and that is, as I said before, to do with a with away the multi-cultural America," Springer explained. "He wants America to be basically Christian and white. Keep out the Mexicans, keep out the Muslims, et cetera. The only institutions left to make sure that we keep a multi-cultural society are the courts and the media. That's why they go after the courts and the media all the time."

"But Trump, it's like a drug for him," he continued. "So he can't get the mainstream won't respect him. Therefore, he goes to the things he can control and that's the tabloid journalism or the Twitter account. So Trump gets his drug and Bannon gets the goal of doing away with mainstream media."

"You've got Sean Hannity who could not be a bigger hype man -- he's sort of the Flavor Flav to Donald Trump," Springer asserted. "You've got Breitbart where they're hiring from. They're pulling people from Breitbart and putting them in the administration. And then of course inside the administration, people like Bannon, Sebastian Gorca and Stephen Miller."

.@jerryspringer on how Steve Bannon apparently wants to make American a white Christian nation. Do you agree? #AMJoy https://t.co/g96pMQU6zu