Joy Reid goes off on GOP pundit blaming Democrats: Remember 'I alone can fix it'? 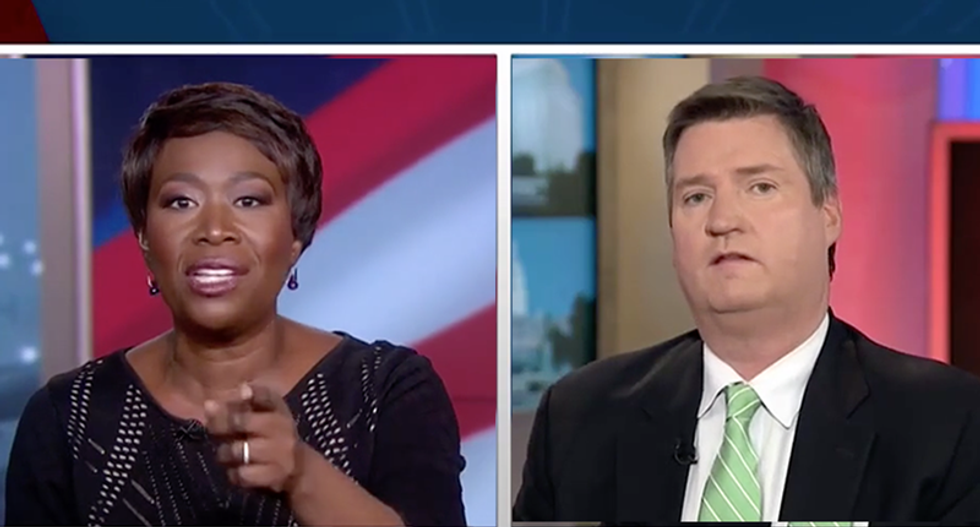 MSNBC's Joy Reid went off on Republican strategist John Feehery for trying to claim that everything is the "end of the world" unless a GOP bill is passed and that Democrats are to blame.

"The Republican Party learned nothing from the election of Donald Trump, including Donald Trump," Reid said. She explained that Trump won in Rust Belt areas of working class voters who thought Trump was there to save them, "not take away their Medicaid. They thought that he was Daddy Warbucks." Instead, she said that Trump has gotten into bed with Speaker Paul Ryan and his dream to end the social safety net.

Feehery tried to claim that sometimes you win by losing, which prompted host Chris Matthews and Reid to laugh out loud.

"They lost!" Matthews shouted. "Do you know what the word loser means? How come you can't say loser? Because Trump says it all the time."

Reid noted that it's the GOP that talks about Obamacare in "apocalyptic terms."

"It's imploding!'" She said, mimicking Trump's Friday press conference. "They did the same thing with this emergency that we had to ban the Muslims because 'we're going to die right now!' And then went on to something else. Health care is so important you can't just say, 'we failed, let's move on to something else.'"

When discussing infrastructure Feehery railed against the Freedom Caucus for causing all of the problems and when Matthews attempted to interrupt him, Feehery abruptly shouted at Reid. "Will you let me finish?!" He went on to agree that Democrats should come to the table and play ball after being left out of the game.

"Let's remember that Republicans said for eight years that there was nothing that President Obama could propose that they would lift one finger to support," Reid recalled. "Now we suddenly discover that when Republicans are in total control of the government and can't get their act together. We need Democrats to discover bipartisanship. Did you ever say one time in eight years, that Republicans should come to the table with Obama. You cannot expect or demand Democrats play ball, they have zero incentive to play ball. Why should they?"