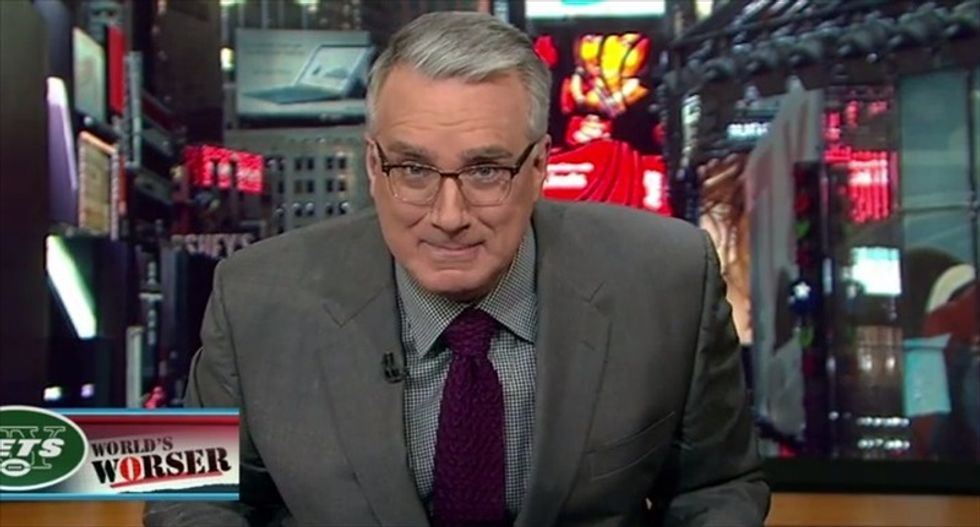 The "p*ssy grabber," as Olbermann called him, "has now become verbally and grossly fixated on the breasts of a translator during a meeting with the Japanese Prime Minister."

Olbermann then recalled Trump's questionable historic references when he named Ted Cruz's father as the shooter of former President John F. Kennedy. There was the time Trump wanted to see tanks during the inauguration festivities as was done during May Day in Russia during World War II. His staff then tried to claim that microwaves were somehow monitoring him in Trump Tower.

The list brought Olbermann to repeat a question he asked one year ago: Could Trump pass a sanity test?

Using only Trump's own words, Olbermann used a psychopath test to score the new Commander in Chief.

"The most you could get was 40 points," he explained. "The threshold for probably being a psychopath is 30 points. Trump's words and actions got him 32 points."

There were two questions Olbermann couldn't answer, however, with regard to probation, violence and criminal records. Given the latest news, Olbermann said that it was entirely possible he could still score as much as a 36 on the exam.

But the craziest sign of "reality disconnect," according to Olbermann comes from Trump's shock that Abraham Lincoln was a Republican.

"Not a lot of people know that," Trump told an audience.

"No. Hadn't heard. Who knew? Let that sink in. Huge if true," Olbermann mocked. "Are you effing kidding me?! Lincoln! The first Republican president. On Mt. Rushmore. Face on the five-dollar bill and on the penny. Only president on the GOP website besides Trump and Trump thinks most people don't even know he was a Republican?"

The irony, Olbermann said, is that Trump made it to a Republican Party fundraiser.

Check out the full commentary below: