On the campaign trail, Donald Trump vowed that if he was elected president, he would resurrect Operation Wetback of 1954. Operation Wetback, the story goes, was the single largest deportation campaign in U.S. history, resulting in more than one million deportations to Mexico and a dramatic reduction in the number of unlawful entries at the U.S.-Mexico border.

As president, Trump has begun to make good on his pledge by issuing two executive orders that promise to ramp up deportations and expand fencing along the U.S.-Mexico border.

But mass deportation never happened during Operation Wetback of 1954. And border enforcement did not follow. As I detail in my book, “Migra! A History of the U.S. Border Patrol,” Operation Wetback was, in fact, a mass legalization campaign chased by an easing of immigration law enforcement in the U.S.-Mexico border region.

Operation Wetback is often cited as a moment when mass deportation and border enforcement reduced the size of the undocumented population living in the United States and ended unlawful entry at the U.S.-Mexico border. They did not. It is time to put this false history to bed.

In 1942, the U.S. and Mexican governments negotiated a labor agreement, known as the Bracero Program, which allowed millions of Mexican immigrants to temporarily work in the United States.

But many agricultural employers rebelled against the program. They preferred the unregulated labor practices they had used for decades to squeeze profits from Mexican workers marginalized by their undocumented status. The Bracero Program, among other things, guaranteed Mexican contract workers a minimum wage and sanitary housing. In South Texas, in particular, farmers and ranchers not only refused to use the Bracero Program but took up arms against the U.S. Border Patrol when they came to apprehend their workers.

Operation Wetback of 1954 was a campaign to crush the South Texas uprising and force their compliance with the Bracero Program. However, Mexican workers paid the greatest price.

Operation Wetback’s first iteration began in 1953 when Harlon B. Carter, the head of the U.S. Border Patrol in the southwestern United States, concocted a plan to use the U.S. military to round up and deport undocumented Mexicans. The plan, called Operation Cloudburst, made it all the way to President Eisenhower’s desk. Eisenhower considered it but nixed the idea since the Posse Comitatus Act largely prohibits the use of the military for domestic law enforcement. Instead President Eisenhower appointed Joseph Swing, a former military general, to head the Immigration and Naturalization Service.

Carter was a convicted murderer. In 1931, at the age of 17, he killed Ramon Casiano, a Mexican-American teen, in Laredo, Texas. Carter had been upset that Casiano and his friends had been hanging out in front of the Carter home. So Carter hunted them down, aimed a shotgun at Casiano’s chest and pulled the trigger. A jury convicted Carter of the killing, but the conviction was later overturned on a procedural technicality. Several years later, Carter joined the U.S. Border Patrol.

In May of 1954, the U.S. attorney general, Swing and Carter issued a press statement announcing Operation Wetback. Soon, they promised, an unprecedented, paramilitary surge of Border Patrol officers would sweep across the southwestern United States to find, detain and deport unauthorized Mexican immigrants. As Carter explained to the Los Angeles Times, “an army of Border Patrol officers complete with jeeps, trucks, and seven aircraft” would soon unleash an “all-out war to hurl… Mexican wetbacks back into Mexico.”

Panic whipped through Mexican immigrant communities in southwestern states. Deportations and forced removals had been on the rise for a decade, spiking from 10,613 expulsions in 1942 to 905,236 in 1953. Carter and Swing promised more. So many more that the Border Patrol was already converting public parks into “concentration camps” for detaining at least 1,000 people at a time.

The officials’ rhetoric forecast a callous, dehumanizing and warlike campaign, priming immigrants, employers and the American public in general for a spectacular show of force. 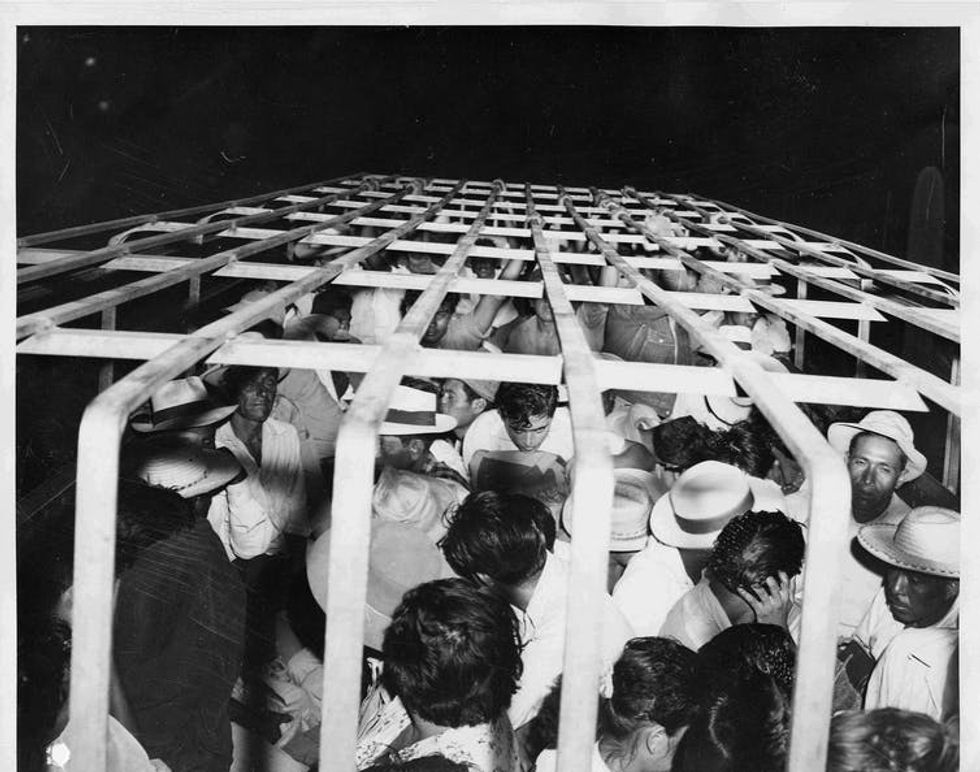 The U.S. Border Patrol packed Mexican immigrants into trucks when transporting them to the border for deportation.

Everywhere the Border Patrol went, reporters followed, snapping photos and broadcasting stories of Mexicans being rounded up, detained and deported back to Mexico. In many cases, the deportees were crammed onto buses, trains, planes or boats to be forcibly relocated into the interior of Mexico and abandoned far from both home and the border. A congressional inquiry into conditions on one of the deportee boats would later describe it as an “18th-century slave ship” and a “penal hellship.”

By October 1954, large numbers of Mexicans had been publicly rounded up, detained and deported. INS Commissioner Joseph Swing declared that the historic campaign had hurled more than one million Mexicans deep into Mexico.

There’s a story that General Swing did not invite journalists to cover. Without reporters in tow, Carter dispatched teams of Border Patrol officers to hold meetings with employers across the Southwest during the summer of 1954.

In particular, they met with South Texas employers, promising them constant raids if they refused to use the Bracero Program. And to appease the employers’ complaints about the program’s requirements, the officers offered two stripped-down versions of the Bracero Program. They were known as the the I-100 and Specials programs, which met some of the employers’ demands for fewer provisions for Bracero workers, and more control over the hiring and firing process.

If employers still declined to use the program, Border Patrol officials threatened to permanently station a two-man team on the grower’s farm until the grower signed a pledge to use braceros instead of unauthorized workers. It worked. The number of Mexican workers signed up with the Specials and I-100 programs in Texas surged from 168 in July of 1953 to 41,766 in July of 1954, around the same time Operation Wetback was underway. Across the country, the number of Mexicans participating in the Bracero Program also rose.

But the declining number of deportations was about more than the use of the Bracero Program, which, until terminated in 1964, provided a form of legalization for many Mexican men working in the southwestern United States.

The U.S. Border Patrol also radically changed its police practices. Between 1944 and 1954, the Border Patrol routinely used 12-man task forces bolstered by planes and buses to ramp up apprehensions in the U.S.-Mexico border region.

In other words, after General Swing declared “conquest” at the border, he kept apprehensions low at the U.S.-Mexico border by changing patrol tactics.

To date, President Trump is pulling from the 1954 playbook. The executive orders and Department of Homeland Security memos announced sweeping plans to deport millions of unauthorized immigrants. And although swiftly retracted, a leaked memo regarding the possibility of the National Guard assisting in mass deportation churned fears that the federal government is preparing a warlike campaign on undocumented immigrants, namely Mexicans and Central Americans.

But there is no precedent for President Trump’s immigration plan. If Congress fully funds President Trump’s executive orders, including 10,000 new ICE agents, 5,000 new Border Patrol officers and an expansion of the border wall, they will hurl us into uncharted territory, unleashing an era of mass deportation and border enforcement to which not even Operation Wetback of 1954 will compare.