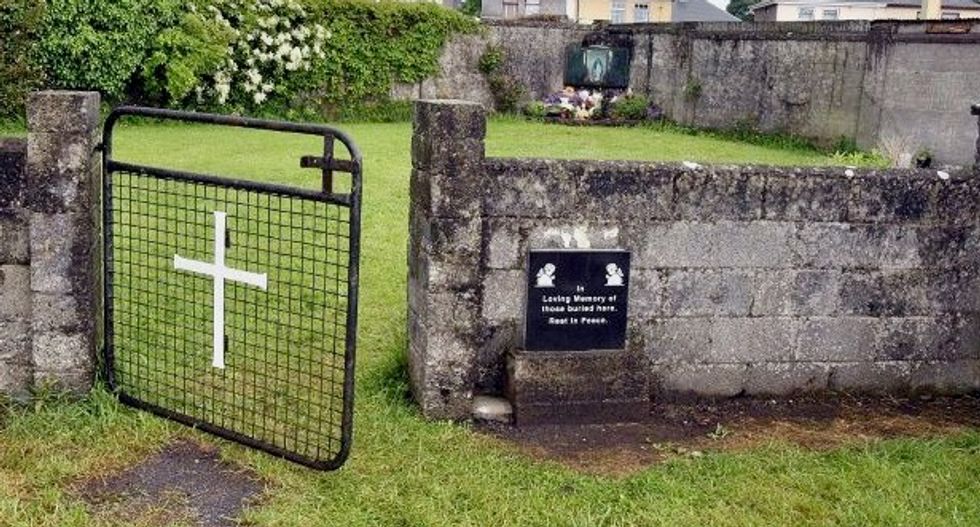 A shrine in Tuam, County Galway erected in memory of up to 800 children who were allegedly buried at the site of the former home for unmarried mothers run by nuns, on June 9, 2014

"Significant quantities" of baby remains have been discovered in an apparent makeshift crypt at the site of a former Catholic home for unmarried mothers in Ireland, an official commission said Friday.

The find in the town of Tuam in western Ireland came during extensive excavations by the Commission on Mother and Baby Homes, which was set up following the first claims in 2014 of possible child burials at the site.

The Commission said it was "shocked" by the discovery.

It said in a statement that the remains had been found in what appears to have been a makeshift crypt divided into 20 chambers that had been part of a sewage system.

"Significant quantities of human remains have been discovered in at least 17 of the 20 underground chambers which were examined.

"A small number of remains were recovered for the purpose of analysis. These remains involved a number of individuals with age-at-death ranges from approximately 35 foetal weeks to 2-3 years," the statement said.

The Commission said radiocarbon dating of the samples recovered "suggest that the remains date from the timeframe relevant to the operation of the Mother and Baby Home" and that investigations would be continuing.

The government-sanctioned commission was set up following research by a local historian, Catherine Corless, who found that 796 babies and children died at the home run by the Bon Secours Order between 1925 and 1961 but there were no burial records for them.

She has always maintained they had been buried at the site.

The Minister for Children and Youth Affairs Katherine Zappone called it "very sad and disturbing news".

"Up to now we had rumours. Now we have confirmation that the remains are there, and that they date back to the time of the Mother and Baby Home, which operated in Tuam from 1925 to 1961," she said.

"Today is about remembering and respecting the dignity of the children who lived their short lives in this home. We will honour their memory and make sure that we take the right actions now to treat their remains appropriately," she said.

In a statement, the religious order involved said it would continue to co-operate fully with the commission.

"On the closing of the home in 1961, all the records for the home were returned to Galway County Council, who are the owners and occupiers of the lands of the home.

"We can therefore make no comment on today's announcement, other than to confirm our continued co-operation with and support for the work of the commission in seeking the truth about the home," the order said in a statement.

The commission is investigating allegations of abuse at 18 religious-operated institutions between 1922 and 1998. An estimated 35,000 unmarried pregnant women are believed to have resided in these homes.