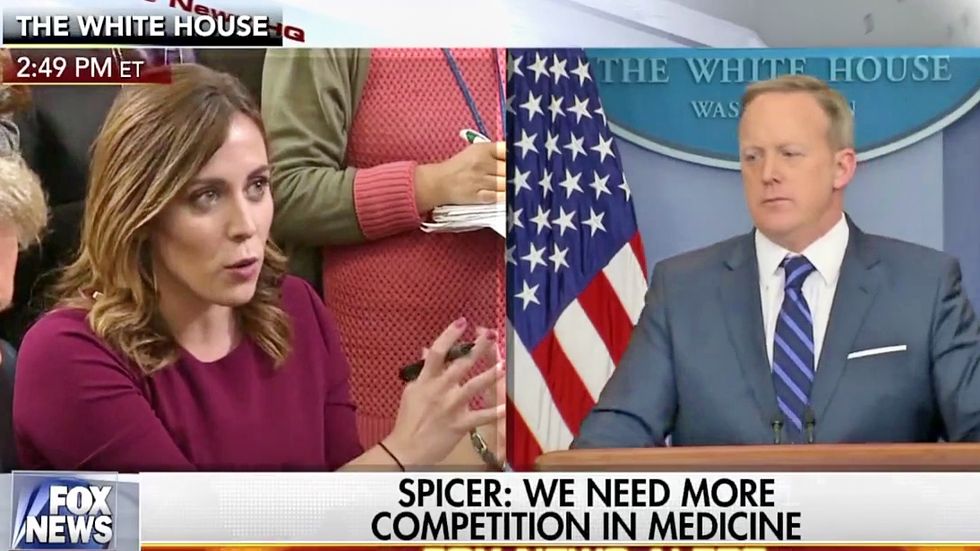 MSNBC White House correspondent Hallie Jackson backed White House Press Secretary Sean Spicer into a corner by asking him why President Donald Trump would call on Congress to investigate wiretapping information he already claims to have.

During Tuesday's White House briefing, Jackson asked Spicer, if Trump already has proof that President Barack Obama illegally wiretapped him then why would he call for a congressional investigation instead of simply presenting his evidence?

"You said the president stands by his tweets Saturday morning that President Obama ordered this wiretap," she noted. "You've also said that the president wants Congress to investigate. Some members of Congress, by the way, have asked the White House and asked the president to come forward with the information."

"So bottom line, why would the president want Congress to investigate for information he already has?" Jackson wondered.

Spicer asserted that the president was concerned about the "separation of power aspect."

"It's a question of appropriateness," Spicer said.

Jackson pushed back: "But if the president has the info... if he's sitting on this information, if he's found out -- he's now directing or asking or recommending that the intelligence committees look into this. And you talked about they have resources and staff, which they do. But why expend those resources and staff if the president found out this information and has it?"

According to Spicer, Trump wants Congress to "add credibility" to the investigation.

"I think we've made it very clear how he wants this done," the press secretary concluded.

Watch the video below from Fox News, broadcast March 7, 2017.