'No one is telling a man what to do with his penis’: CNN analyst rips Kayleigh McEnany over Women’s Strike 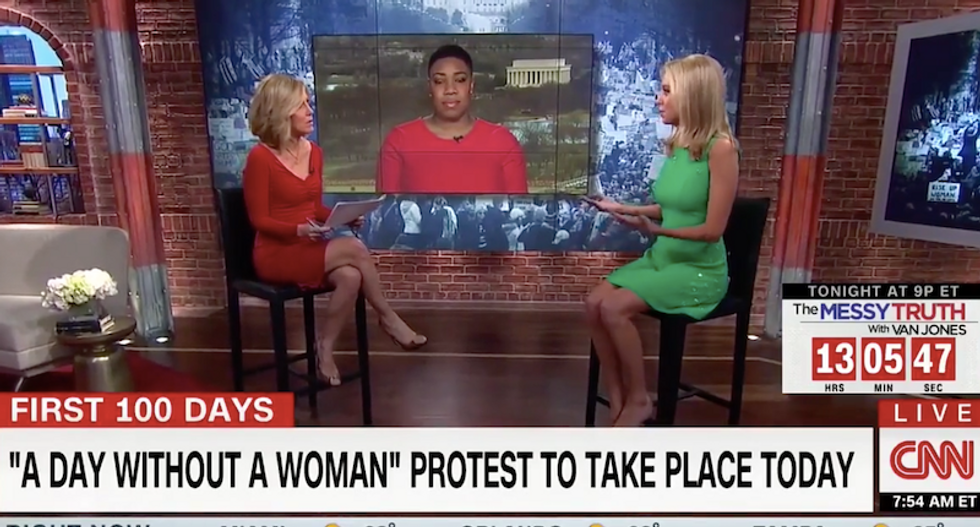 On Wednesday, women across America are going on strike, a mass action designed to show how essential—yet undervalued—women's labor is to the American economy. On CNN's New Day, conservative commentator Kayleigh McEnany and former Bernie Sanders press secretary Symone Sanders clashed over whether the protest unfairly excludes conservative women.

"These women do not speak for me or other conservative women,” McEnany asserts. “If we want to be honest here, let’s call it a day without liberal women.”

The discussion then pivots to Planned Parenthood, a group that provides millions of women—liberal and conservative alike—with health care, whose future is uncertain; the Trump administration reportedly asked the group to stop performing abortions to keep their federal funding.

“I don’t want to take away any funding. I want to redirect that funding to other institutions that don’t perform abortions,” said McEnany. “They killed 327,000 babies in 2014 and a lot of women don’t stand for that.” McEnany does not specify which institutions have the capacity to take on the health care Planned Parenthood provides, which includes cancer screening and prevention. Sanders counters that although she herself has never had an abortion she relies on Planned  Parenthood for her medical care. "Sometimes it's—men too—sometimes it's [people's]  only option."

The women's march, Sanders points out, should not be about constraining women's rights. Sanders then points to a pretty troubling double standard in America's political discourse when it comes to male and female genitalia.

“No one is telling a man what to do with his penis,” she said. “I don’t understand why my uterus and vagina is so much a topic of conversation.” An exciting morning for CNN.