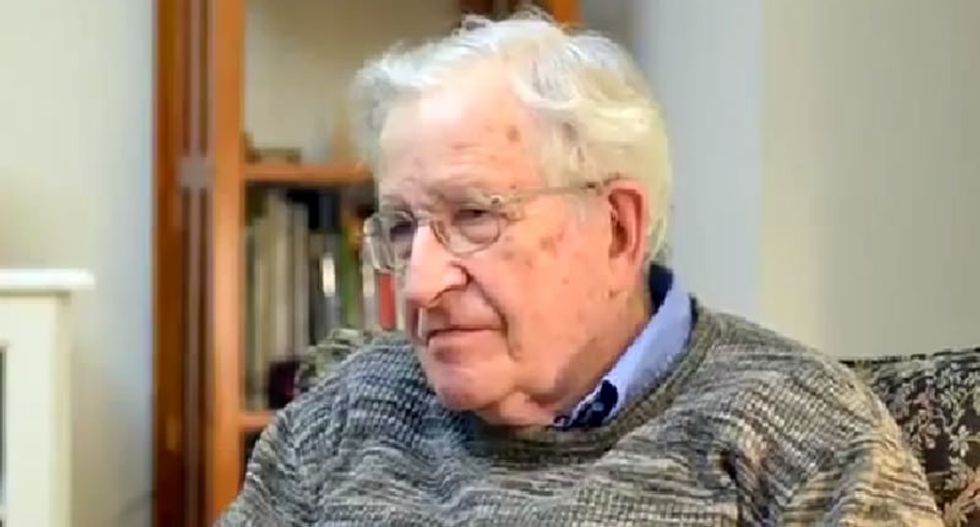 Author and political philosopher Noam Chomsky sounded a dire warning on Monday in an interview with AlterNet's Jan Frel, saying that President Donald Trump could stage a "false flag" terror attack in an effort to consolidate his power and strip Americans of their constitutional rights.

Chomsky warned that eventually the people who voted for Trump will realize that his "promises are built on sand" and begin to lose faith in his presidency, at which point Trump will need someone to scapegoat, so he will say, "'Well, I'm sorry, I can't bring your jobs back because these bad people are preventing it.' And the typical scapegoating goes to vulnerable people: immigrants, terrorists, Muslims and elitists, whoever it may be. And that can turn out to be very ugly."

"I think that we shouldn't put aside the possibility that there would be some kind of staged or alleged terrorist act, which can change the country instantly," Chomsky said.

Chomsky -- who has called Trump a "con man" who will drag civilization "down to the utter depths of barbarism" -- also said that much of the world is amused at the outrage many Americans feel about Russian meddling in the 2016 election.

"I mean whatever the Russians may have been doing, let's take the most extreme charges, that barely registers in the balance against what the U.S. does constantly," he said. "Even in Russia. So for example, the U.S. intervened radically to support [Boris] Yeltsin in 1991 when he was engaged in a power play trying to take power from the Parliament, Clinton strongly supported him. In 1996, when Yeltsin was running, the Clinton administration openly and strongly supported them, and not only verbally, but with tactics and loans and so on."

"All of that goes way beyond what the Russians are charged with, and of course that is a minor aspect of U.S. interference in elections abroad," said Chomsky, adding that the U.S. operates under a philosophy of "If we don't like the election, you can just overthrow the country."

The White House is reportedly in turmoil after the collapse of the administration's healthcare law, which was withdrawn before it could come to a vote on Friday. While the president's poll numbers are at historic lows, Trump's supporters are still largely loyal to the man they voted for.