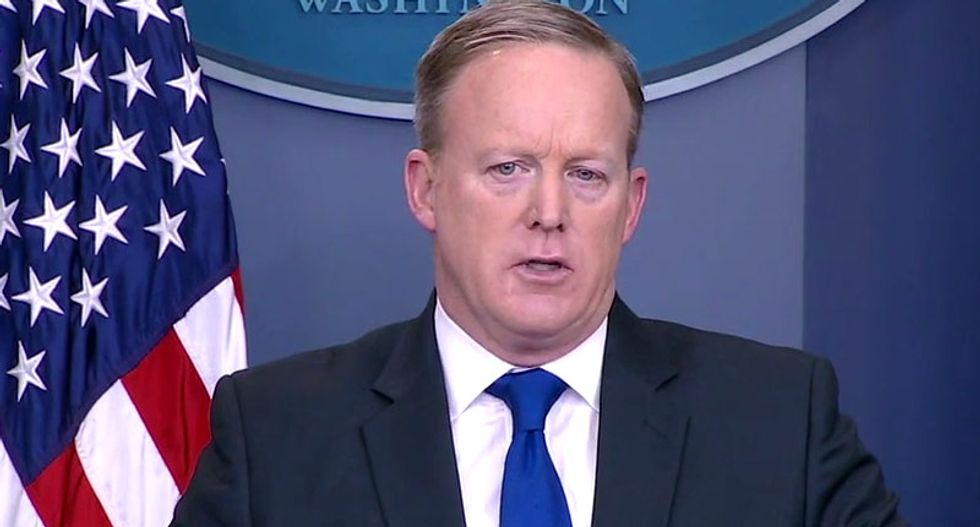 Sean Spicer claimed Tuesday, in his first press conference this month, that he lacked the authority to offer evidence to back Trump's tweeted allegations that Obama had wiretapped him in the month ahead of the election, reported The Hill.

"No, that's above my pay grade," Spicer told a reporter.

Carney pointed out shortly afterward on Twitter that Spicer actually had the same security clearance as top White House officials and would, in fact, be privy to such evidence if it existed.

"Actually, his 'pay grade' is the highest possible at WH - same as for chief of staff, national security and other senior personnel," Carney tweeted.

Trump posted a series of tweets Saturday morning, apparently based on allegations by right-wing radio host Mark Levin and reported by Breitbart News, claiming to have learned Obama had ordered a wiretap of Trump Tower in October.

"Mr. Trump, advisers said, was in high spirits after he fired off the posts," the New York Times reported Tuesday. "But by midafternoon, after returning from golf, he appeared to realize he had gone too far, although he still believed Mr. Obama had wiretapped him, according to two people in Mr. Trump’s orbit."

The newspaper also reported that Trump spoke to others Saturday afternoon at his Mar-A-Lago resort and appeared uncertain how warrants would be obtained to secretly wiretap an American citizen.

White House officials have struggled to explain where Trump got his information, and the president has asked Congress to find the proof he claims to have.