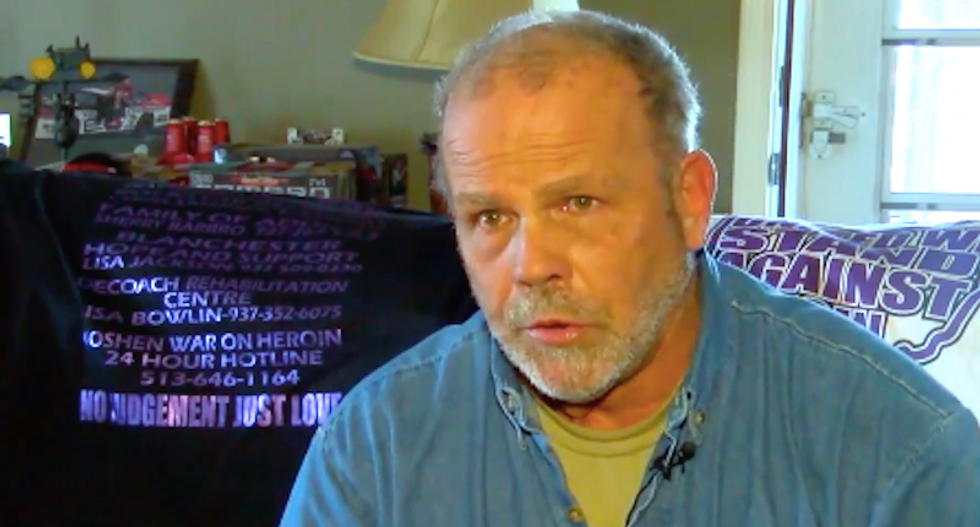 An Ohio father who lost two of his three children to heroin overdoses said he received a letter celebrating their deaths that was postmarked from a condominium complex owned by President Donald Trump.

Roger Winemiller shared his family's story earlier this month with the New York Times and WCPO-TV, and he got an anonymous letter about a week later that called for the repeal of Obamacare and referred to Trump, the TV station reported.

"It's wonderful that junkies overdose and die," the letter reads. "That is the only way we can rid America of all those low-life scum. I am so happy that your children did their part in reducing the drug population."

The writer suggested that the Republican plan to repeal and replace the Affordable Care Act would break the grip of heroin addiction in many parts of the U.S.

"We should look forward to the repeal of filthy Obamacare," the letter reads. "When we reduce mooching, those thieves will quickly die when they lose medical access."

The Wayne Township father lost his 31-year-old daughter to overdose March 26, 2016, and her older brother died from overdose nine months later. His surviving son, Roger T. Winemiller, has also struggled with drug addiction but is currently in recovery.

"It's a perfect example of what we face here in this nation," Winemiller said. "The type of people who are too heartless and self-centered to realize that addicts are beautiful people, and they are someone's son or daughter. If they had a chance to talk to a recovering addict and see how vibrant they are, how intelligent, they might think differently."

The letter was marked with a Trump Palace return address, but an employee told WCPO that the Trump Group-owned residential property had never had a resident whose name matched the sender's signature.

Warren County, where Winemiller lives, backed Trump over Hillary Clinton in November's election by a 67-29 spread -- a much higher margin that Ohio's overall 52-44 tilt toward the Republican candidate.

The southwestern Ohio county, like many others that backed Trump, is struggling with an epidemic of heroin addiction.

A recent task force report found Warren County, an exurban community between Cincinnati and Dayton, had seen a double- or triple-digit increase in opioid heroin overdoses and deaths.

Drug overdose was listed as the cause of death in 20 fatalities in 2014, up from 11 in Warren County a decade before, and shot up to 60 in 2015, according to medical authorities.

About 70 percent of those addiction cases start with prescription drug use in the home, but some addicts move on to heroin -- which is both cheaper and more powerful.

A post-election analysis by historian Kathleen Frydl found a strong correlation between the opioid epidemic and counties in Ohio and Pennsylvania that swung from President Barack Obama in 2012 to Trump in 2016.

Twenty-six Ohio counties reported 20 or more drug overdose deaths per 100,000 people in 2015, and there was a 10 percent surge in all but two of those counties in support for Trump compared with Republican Mitt Romney in 2012.

There was a corresponding 10-percent or more drop in Clinton support compared with Obama in the previous election -- and the shift was big enough for five of those counties to flip from Democrat in 2012 to GOP in 2016.

All but four of 33 high-overdose counties in Pennsylvania followed the same trend.

Trump told a joint address to Congress last month that his proposed border wall would help to eventually end "our terrible drug epidemic," although many experts doubt that will be as effective as he promises.

Philippine President Rodrigo Duterte claimed in December that Trump praised him in a phone call for conducting his brutal war on drugs "the right way."

Duterte has encouraged the extrajudicial killing of suspected drug users and dealers, and more than 2,000 Filipinos have reportedly been slain by police and vigilantes since he took office in June.

"Hitler massacred 3 million Jews," Duterte said in September. "Now, there are 3 million drug addicts. I’d be happy to slaughter them."