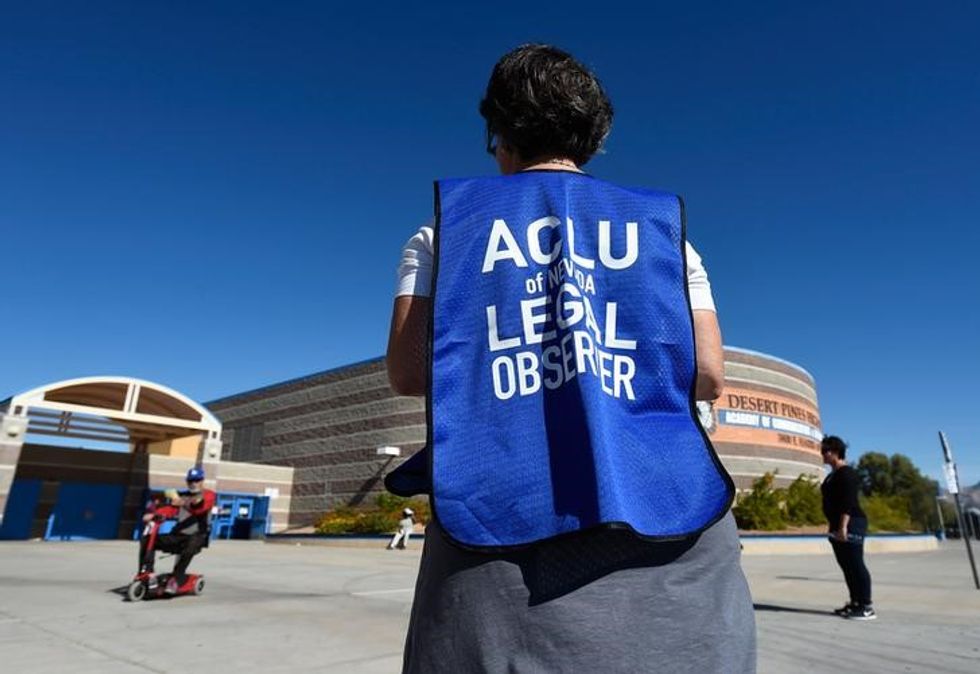 File photo: A member of the ACLU observes a polling station during voting in the 2016 presidential election at Desert Pines High School in Las Vegas, Nevada, U.S November 8, 2016. REUTERS/David Becker

The American Civil Liberties Union is launching what it bills as the first grassroots mobilization effort in its nearly 100-year history, as it seeks to harness a surge of energy among left-leaning activists since the November election of Republican Donald Trump as U.S. president.

The campaign, known as PeoplePower, kicks off on Saturday with a town hall-style event in Miami featuring "resistance training" that will be streamed live at more than 2,300 local gatherings nationwide.

Membership in the civil rights organization, which was founded in 1920, has tripled to more than 1 million since Trump's election, the group says.

As activists have marched in streets, demonstrated at airports and confronted U.S. lawmakers regularly since election day, progressive groups like MoveOn and the newly formed Indivisible have sought ways to translate that frustration into local action.

That is the idea behind PeoplePower, which represents a major strategic shift for an organization that has traditionally focused on courtroom litigation, Romero said in a phone interview on Friday. Approximately 135,000 people have signed up for the campaign.

"Before, our membership was largely older and much smaller," he said. "Our members would provide us with money so we could file the cases and do the advocacy. What's clear with the Trump election is that our new members are engaged and want to be deployed."

For example, the Miami event will encourage individuals to engage local officials in conversations about immigrant policies in their town or city. The ACLU has prepared "model" ordinances ensuring the protection of immigrant rights that supporters can press legislators to adopt, part of a campaign to create "freedom cities," according to ACLU political director Faiz Shakir.

Suggested tactics, like the use of text messages as a mass mobilization tool, will mirror some of those employed by the insurgent presidential campaign of U.S. Senator Bernie Sanders, who mounted a surprisingly robust challenge to Hillary Clinton for the Democratic nomination.

"It's completely unprecedented," Romero said of the response since Trump's victory. "People are wide awake right now and have been since the night of the election."