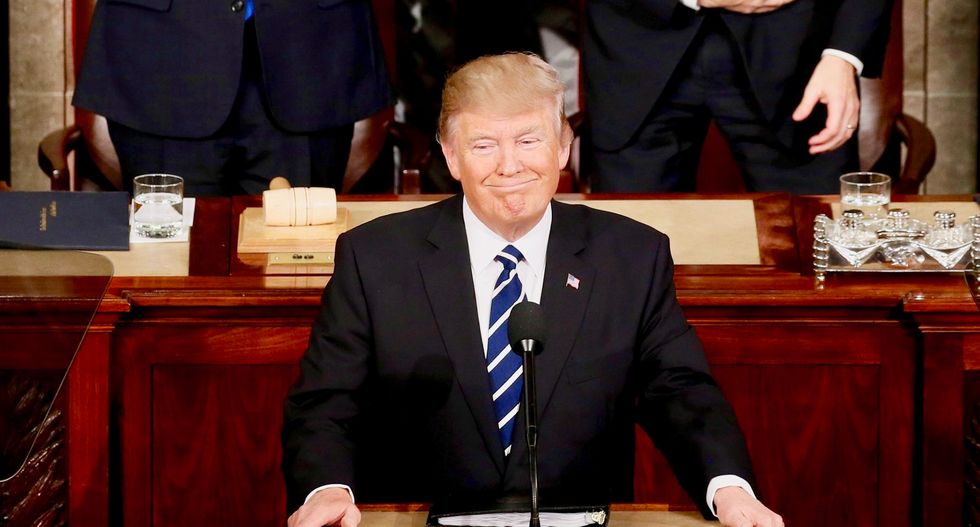 President Donald Trump told Congress on Tuesday that more needs to be done to bring down "artificially high" prices for prescription drugs, while at the same time praising a drug that turns out to cost $300,000 per year.

During the televised address, Trump acknowledged in the audience Megan Crowley, a college student who has Pompe disease - a rare muscle disorder that can be treated with an expensive enzyme replacement therapy.

"But our slow and burdensome approval process at the Food and Drug Administration keeps too many advances, like the one that saved Megan's life, from reaching those in need," the president said. "If we slash the restraints, not just at the FDA but across our Government, then we will be blessed with far more miracles like Megan."

Trump has in the past excoriated drugmakers for charging "astronomical" prices, while acknowledging how "complicated" the nation's healthcare system is.

Representatives of the Trump administration could not immediately be reached for comment on Wednesday on whether the president believes the treatment price for Pompe disease is fair.

Trump's comments on Tuesday night highlight an issue central to the industry and investors - the potential for deregulation of the FDA, the agency charged with approving pharmaceutical products.

In 2006, the FDA - after a nine-month review - approved infused enzyme replacement therapy Myozyme for patients born with the condition. A similar drug, Lumizyme, was approved in 2010 for late-onset Pompe disease and is now used regardless of a patient's age.

The average annual cost of treatment is $298,000, according to Paris-based Sanofi SA, which now owns the drugs.

Under the Orphan Drug Act of 1983, drugs for rare diseases - defined as those that treat fewer than 200,000 patients - are given a range of incentives including seven years of marketing exclusivity. "Pharmaceutical companies know they get a free pass for very expensive drugs for orphan diseases, whereas they don't for mainstream diseases," said Joel Hay, professor of pharmaceutical economics and policy at the University of Southern California.

The National Organization for Rare Disorders (NORD) applauded Trump's recognition, but disagreed with the idea that the regulatory process needs an overhaul.

"Our patients deserve the same quality therapies as everyone else, and to weaken the standards will only threaten our population with unsafe, ineffective therapies," NORD said in a statement on Wednesday.

Pompe disease, affecting 5,000 to 10,000 people worldwide, prevents the body from making enough of an enzyme used by heart and muscle cells to convert a form of sugar called glycogen into energy. When glycogen builds up in these cells it can lead to disability and death.

NORD estimates that around 30 million Americans suffer from 7,000 rare diseases.