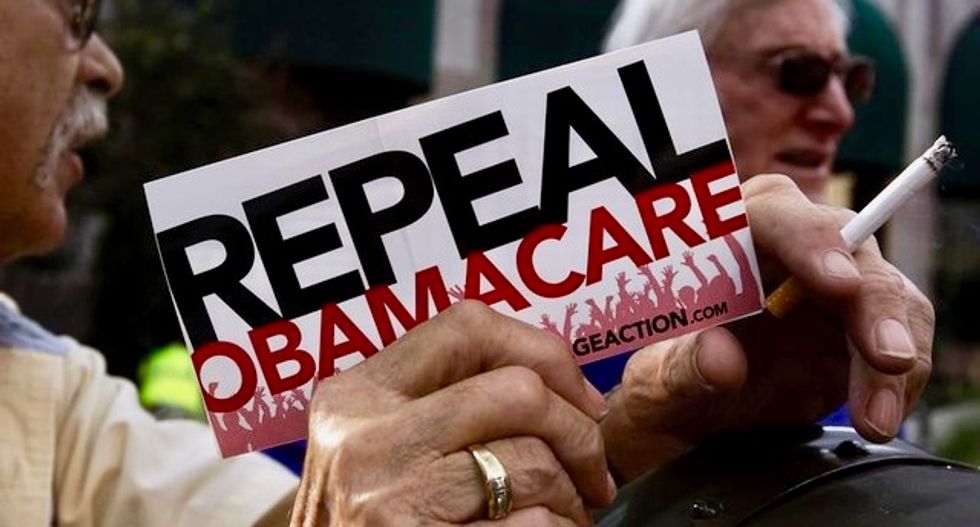 Republicans cleared the first hurdle early on Thursday in their plan for a massive overhaul of the U.S. healthcare system backed by President Donald Trump, despite Democratic concern that the cost of the bill and its impact on the budget remain unknown.

The House of Representatives Ways and Means Committee approved the bill along party lines on Thursday morning after debating the draft legislation for nearly 18 hours.

The chamber's Energy and Commerce committee continued its own marathon session, two days after it was unveiled by Republican leaders.

"This is an historic step, an important step in the repeal of Obamacare," said Republican Representative Kevin Brady, chairman of the House Ways and Means committee, after the committee voted 23-16 on the measure.

Congress is hoping to pass the bill, which would roll back much of the 2010 Affordable Care Act, popularly known as Obamacare, within a few weeks. The bill would roll back the individual mandate for people to buy insurance, reverse most Obamacare taxes, introduce a new, smaller system of tax credits based on age rather than income, and overhaul Medicaid, the government health insurance program for the poor.

The committee, which was looking at the tax-related provisions of the bill, made no changes, despite dozens of attempts by Democrats to introduce amendments.

Hospitals, doctors, insurers and patient advocates had appealed to congress after the draft was released on Monday to reconsider the broad cuts and how they would affect healthcare.

The bill is Trump's first legislative test and the fast-emerging disorder around it comes after the chaos triggered by his travel ban on citizens from several Muslim-majority nations, which he later had to revise.

Trump and fellow Republicans campaigned last year on a pledge to dismantle the Obamacare healthcare law, the signature domestic policy achievement of Democratic former President Barack Obama, calling it a government overreach that had ruined the more than $3 trillion U.S. healthcare system.

Obamacare, formally called the Affordable Care Act and condemned by Republicans since its passage in 2010, enabled 20 million previously uninsured people to obtain coverage, about half through an expansion - which the new bill would end - of Medicaid, the government health insurance program for the poor.

Republican lawmakers face resistance from conservatives within their own ranks who say the bill, which would create a system of tax credits to coax people to buy private insurance on the open market, is not radical enough.

Democrats denounce it as a gift to the rich and say informed debate on the plan is impossible without knowing its cost.

"Republicans should not advance Trumpcare until Congress and the people we represent understand the full scope of its impact," Democratic Senator Chris Van Hollen, a member of the Senate Budget committee, said in a statement on Wednesday.

Democrats mounted four adjournment motions on the floor of the House on Wednesday, threatening to disrupt the two committee debates, in protest at the lack of analysis of the bill by the nonpartisan Congressional Budget Office (CBO).

"This is decision-making without the facts, without the evidence ... afraid of the facts," House Democratic leader Nancy Pelosi told reporters.

Republicans said they had asked the CBO to "score" the bill - provide a preliminary estimate on its cost - and expect to have that analysis by the time it hits the House floor.

"We're all God's children and we all want a CBO score," said Republican Representative Joe Barton from Texas.

But some Republicans have cast doubt on the accuracy of CBO estimates, suggesting its initial assessment of the cost of Obamacare had proved far wide of the mark.

Trump and Vice President Mike Pence met with leaders of conservative groups who have concerns about the bill on Wednesday and a White House official later said they were "open to constructive improvements that maintain the core principles and get the bill over the goal."

Once the two committees have approved their parts of the legislation, both will go to the House Budget Committee, which is expected to merge them into one bill that will then be voted on by the full House of Representatives.

House Speaker Paul Ryan wants that vote to happen this month so the bill can move to the Senate for consideration.

The top U.S. doctors' organization and several hospital groups have come out strongly against the Republican plan, saying it would probably cause many patients to lose insurance and raise healthcare costs.

Andrey Ostrovsky, the chief medical officer of Medicaid, said on Twitter he was aligned with other experts in opposition to the bill, breaking with Health and Human Services Secretary Tom Price, who has called it "a work in progress."