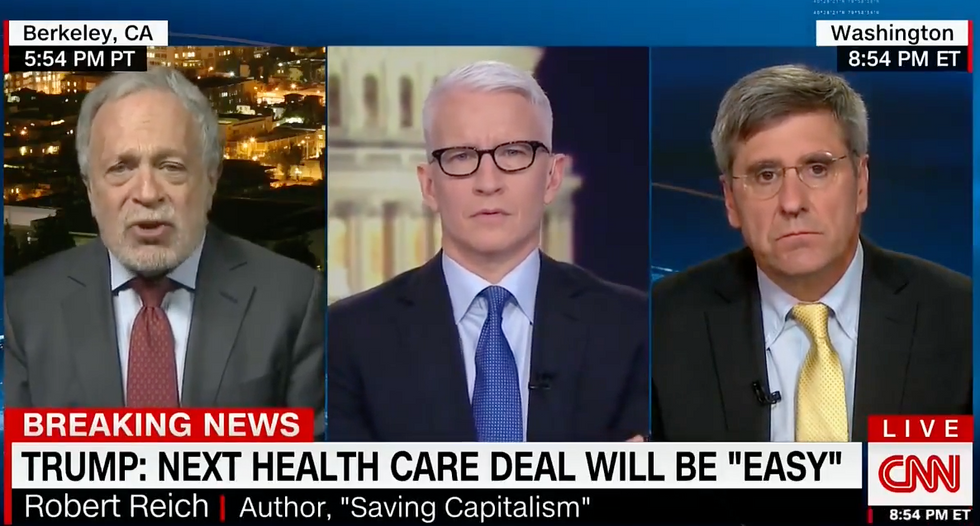 Speaking to senators on Tuesday, Trump insisted he knows Congress will reach a deal on “healthcare,” calling it “such an easy one.” This, despite the president’s claim last week that he was moving on from the central campaign promise if the American Healthcare Act failed (which it did).

“I don’t think Donald Trump has any credibility left on this issue of healthcare,” Reich told Anderson Cooper on CNN’s “AC 360,” noting originally Trump administration officials insisted “there was no plan b, there was only plan a.” Reich said “all of the sudden” the GOP has a plan B, C, D, E, etc.

“Every time he takes a stand it looks like there is really not stand there,” Reich argued pointing out that fellow Republicans, including members of the conservative Freedom Caucus “called [the president’s] bluff.”

“He had no ability to stand his ground,” Reich said. The former labor secretary added he would “eat [his] hat” if Trump managed to make a deal with Democrats that would garner enough support to pass the House.

Cooper asked ex-Trump adviser Stephen Moore to defend the president’s claim, arguing, “If it was such an easy thing to make a deal we wouldn’t be here, there would probably be a deal last Friday.”

Moore said Republicans “are getting very close,” calling Trump’s false assertions that the GOP had no alternative “standard negotiating tactics.”

“They are going to get this done,” Moore assured Reich, warning of a difficult 2018 election cycle if Republicans fail to deliver on their signature pledge to repeal and replace Obamacare.

“I agree with you that they better fix it, that it’s not Barack Obamas problem, it is Republican’s problem,” Reich said. But, he asked, “how are they going to fix it?”

Reich countered that “sounds not only unfeasible, politically, but also stupid politically.”