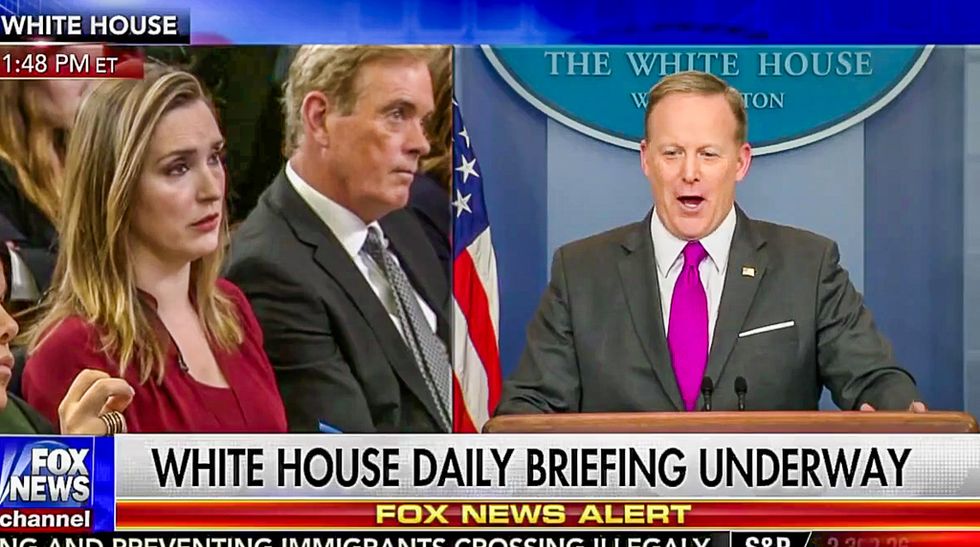 White House Press Secretary Sean Spicer wants everyone to know that he, the White House and the president are "not aware" of a Justice Department investigation into Donald Trump's wiretapping accusations. In fact, he repeated the claim 10 times in response to one question on Thursday and then recommended that reporters use a thesaurus to look up additional ways to say it.

On Wednesday, there was confusion about whether or not President Trump was briefed by the Justice Department before he accused President Barack Obama of illegally wiretapping him. At first Spicer appeared to say that he did not know, before he seemingly corrected himself to say "there is no reason to believe that there is any type of investigation with respect to the Department of Justice."

Spicer on Thursday was asked to clarify whether he was given assurances directly from the Justice Department that the president was not the target of an investigation.

"So when you said 'no reason to believe' it was 'I'm not aware'?" Brennan asked.

"What's that based on?" ABC News Correspondent Jonathan Carl wondered.

"But the question is whether or not [Trump] is the target," Brennan pushed back.

"And the answer is we're not aware," Spicer remarked. "I don't know how much clearer we can be on this."

"I'm not sure what we're dancing around," he added.

"Because yesterday, when you came out and corrected and clarified, people took that as a definitive answer," Brennan noted.

"No, that means we're not aware," Spicer said. "That should be the definitive answer."