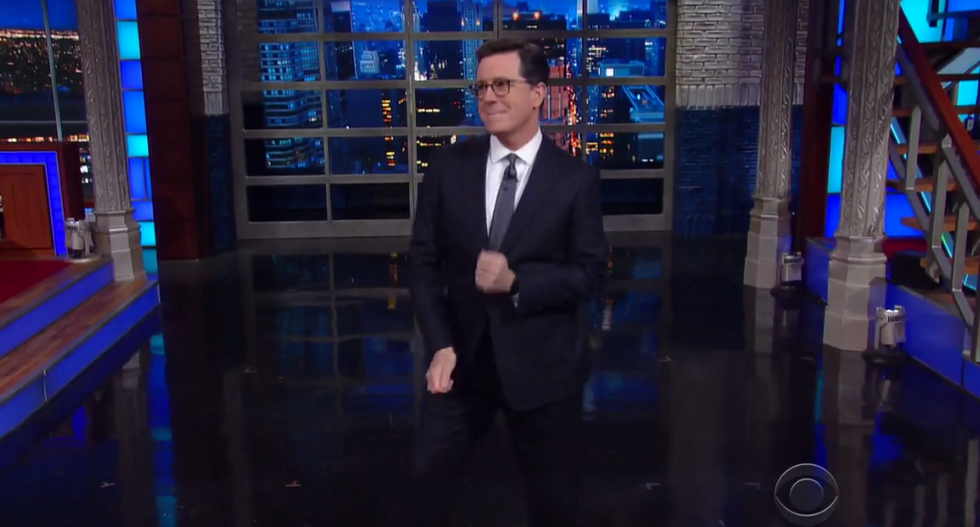 Stephen Colbert on Thursday played the “wrong audio” on a speech Donald Trump gave a women’s empowerment forum, recalling the infamous video where the man who would go on to be President of the United States brags about grabbing women “by the p*ssy.”

The "Late Show" host blamed the mishap on an “unforeseen technical blunder.”

Earlier in his monologue, Colbert torched House Intelligence Committee chairman—and “man who’s really happy you met somebody new”—Devin Nunes over his erratic behavior regarding the committee’s investigation into Russian interference in the 2016 presidential election.

“Nunes is leading the alleged investigation in to alleged ties between the Trump campaign and Russia, allegedly.” Colbert said. “But a lot of Democrats are demanding he step down, because: He sucks.”

“The specific sucking in question involves Nunes’ unsubstantiated claim that he’s seen documents from a secret source that he met at the White House proving that Trump aides were incidentally caught up in government surveillance of foreign agents but it’s not about Russia,” Colbert explained. “And he wont tell anyone the specifics. And now, Nunes vows he will never reveal his source—not even to other members of the intelligence committee.”

“He actually made a public statement about it today,” Colbert said, rolling yet another famous video by pop sensation Rick Astley.

“He really should ri-ckuse himself,” Colbert said.

Watch the hilarity below, via CBS: