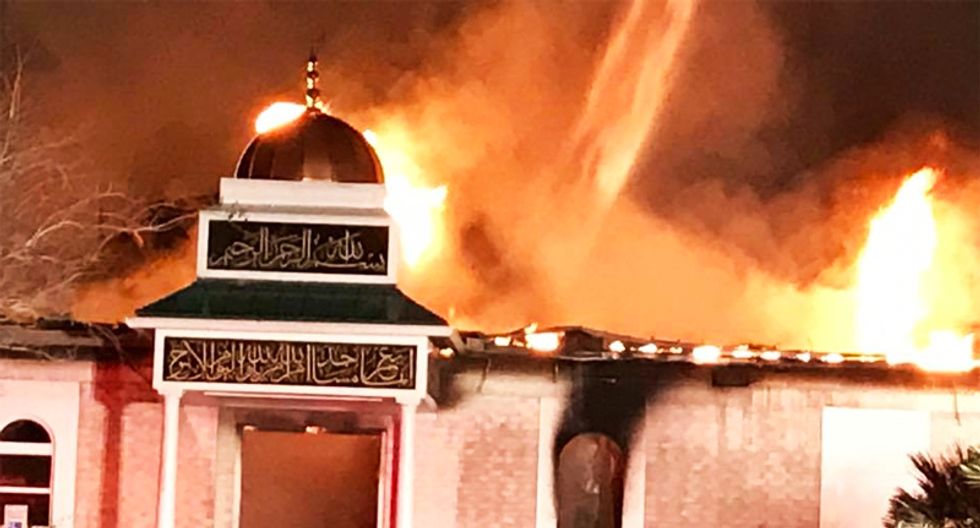 A man detained after federal prosecutors said he was involved in a fire in January that destroyed a Texas mosque has been ordered held on a charge unrelated to the arson, court records showed.

A federal judge ordered Marq Perez, 25, to be detained after he appeared in U.S. district court on Thursday in Corpus Christi but Perez's lawyer Mark Di Carlo on Friday said he was being held because of "hearsay based on hearsay."

Perez was charged with "possession of an unregistered destructive device" unrelated to the fire at the Victoria Islamic Center, about 125 miles (200 km) southwest of Houston, court records showed.

There was no description of the device in court papers, but Di Carlo said it was five large firecrackers bundled together and having a single fuse.

Islamic rights groups have said they saw the fire as part of a growing wave of bigotry toward Muslims in the United States. President Donald Trump, a Republican, was elected last November having promised to impose a ban on Muslims entering the country, which he said would help protect Americans from terrorism.

"We welcome this arrest and thank investigators for their swift and professional actions in apprehending the alleged arsonist," said Mustafaa Carroll, the executive director of the Council on American-Islamic Relations in Houston.

In court, prosecutors presented allegations from two unidentified informants who said that Perez was involved in the arson, Di Carlo said in a telephone interview.

"The allegations of the criminal informants, we thought, were specious," Di Carlo said.

U.S. Magistrate Judge B. Janice Ellington said the evidence against Perez is substantial and he "represents a serious danger to the community," court records showed.

The U.S. Attorney's Office for the Southern District of Texas said no one has been charge in relation to the fire but the matter was still being investigated.

At the detention hearing, the government presented evidence that he was involved in the fire, the prosecutor's office said.

"According to the information presented to the court, he allegedly burglarized the mosque on Jan. 22 and then again on Jan. 28, at which time he also set it on fire," the office said in a statement.

Statements from the informants were not entered into online court records.

Last month, the U.S. Bureau of Alcohol, Tobacco, Firearms and Explosives ruled the fire that destroyed the building and caused about $500,000 in damages as arson.