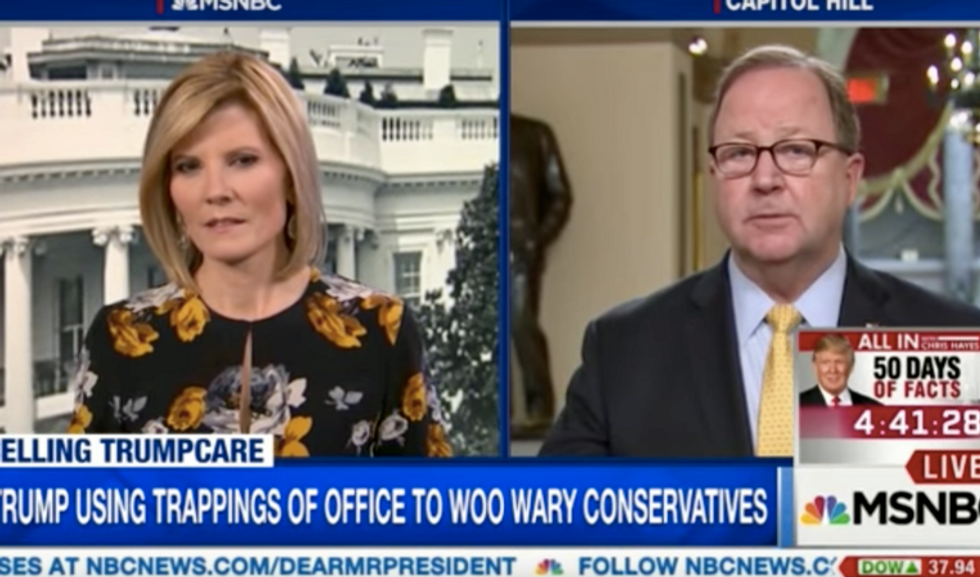 Texas Republican Rep. Bill Flores appeared on MSNBC on Friday to discuss the GOP's push to repeal and replace the Affordable Care Act. Host Kate Snow questioned Flores about a recent feud between Rep. John Shimkus (R-IL) and Rep. Mike Doyle (D-PA) over whether prenatal care should be covered.

"What if I'm a young woman and I don't pick maternal care and then I get pregnant and I wasn't expecting it and I don't have that coverage. How does that work if you've picked the 'wrong' plan?" Snow asked.

Flores suggested options like buying an enhanced plan that includes a surcharge, or a Medicaid expansion depending on income level. Snow then pressed, "What if you don't have coverage for something catastrophic like cancer and then you get cancer?"

The GOP Congressman attempted to explain that they will have coverage for pre-existing conditions, but Snow clarified she was talking about people who don't have cancer and then get it later on. "I'm trying to anticipate what would happen if you had an emergency and you didn't have the right kind of à la carte coverage," she said.

Flores dodged, explaining it would be turned back to the states to come up with different coverage options based on age, which still fails to answer the question of coverage in case of an emergency condition.