'The math is not there!': Robert Reich schools ex-Trump adviser over GOP's 'absurd' Obamacare replacement 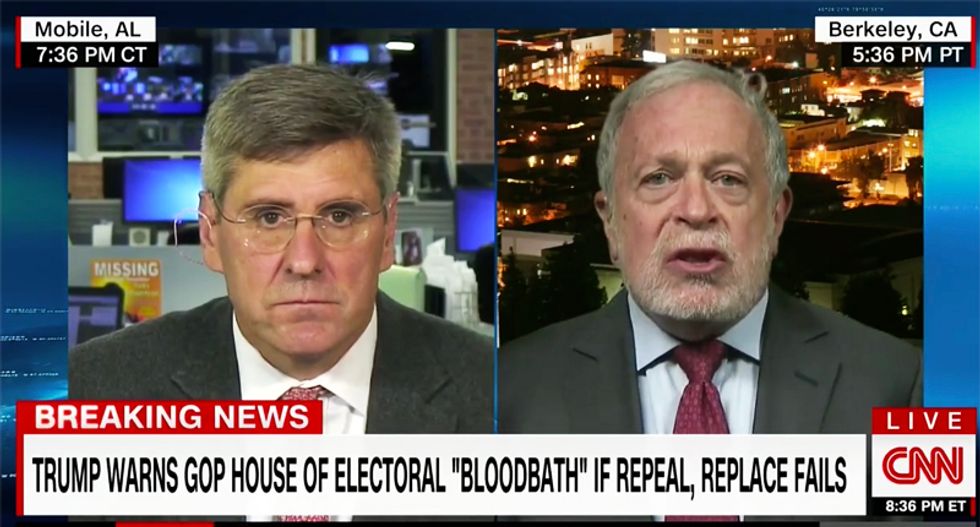 Speaking with CNN’s Anderson Cooper and former Donald Trump adviser Stephen Moore, Reich said the new healthcare bill is “smoking out Republicans” by proving who was only interested in repealing the Affordable Care Act versus who was interested in designing a workable replacement plan. Of the Republicans who are actually interested in “replacing” Obamacare, Reich noted, “They are discovering that the math is not there.”

“If you get rid of the taxes that supported the Affordable Care Act, and you also get rid of the mandate … then you don’t have the wherewithal to replace what you had before,” Reich explained, adding “Republicans are in an impossible position right now.”

Reich later pointed out that the GOP promised to save people money by allowing them to buy insurance across state lines. “That was the big reform that Republicans were going to offer and it’s not in this,” Reich said.

“There is nothing in this for middle class families, for families that voted for Trump, for poor people; this is basically a huge transfer of resources from the poor and the sicker to the wealthier and the healthier,” Reich charged.

Cooper asked Reich to respond to reports that the bill will be take up in two separate meetings Wednesday before receiving a score from the Congressional Budget Office, which is expected to show that the new bill will not cover more people than the ACA.

“How can you possible vote on this if there is no information on coverage or cost?” an incredulous Reich asked. “This is absurd!”

“We’re talking about tens of millions of people,” he continued, pointing out that the ACA faced nonstop hearings and analysis before it was pushed through.

“Here you’ve got nothing,” Reich said, insisting Republicans are trying to “ram this through as fast as they can.”