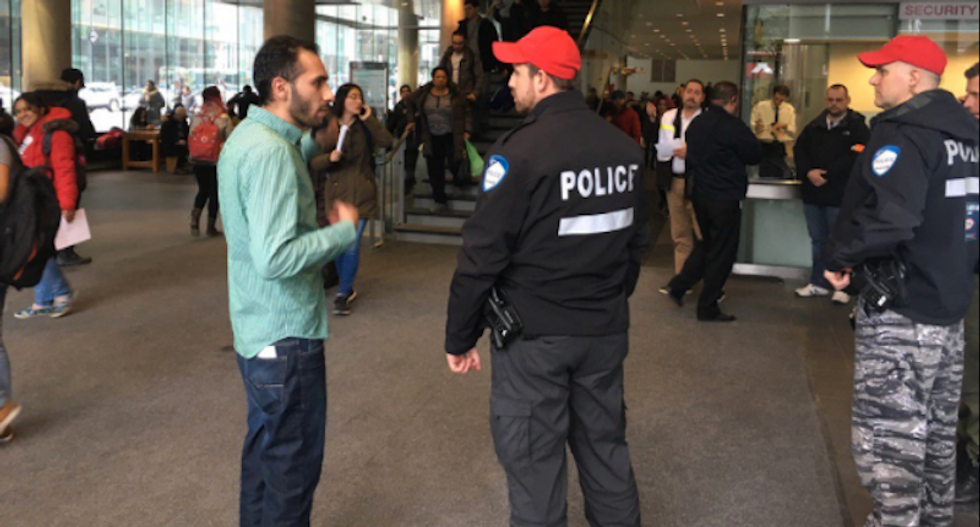 On Wednesday morning, two buildings at Concordia University's downtown campus in Montreal were evacuated after several media outlets received an email threatening to target Muslim students at the college by setting off bombs, the Montreal Gazette reported.

Montreal police are investigating the matter, and police spokesperson Benoit Boisselle said the department does not yet know "whether the threat is founded." The email making the threat was written by a group that called itself the Council of Conservative Citizens of Canada (C4).

The Council of Conservative Citizens (CCC) is a U.S.-based white supremacist group that was founded in 1985 as a spinoff of the White Citizens Councils of the 1950s and 1960s that fought school desegregation, according to the Southern Poverty Law Center.

The group's mission states an opposition to "all efforts to mix the races of mankind," and was described by the Atlantic as the "largest white-supremacist group in the nation." The group has also been active in Canada and was cited in Dylann Roof's manifesto, the white supremacist behind the 2015 Charleston church massacre.

This week, one of the buildings at Concordia that was targeted by the bomb threat is scheduled to hold an Islamic Awareness Week between Monday and Thursday.

The email from the Council of Conservative Citizens of Canada included threats to "detonate once per day, a small artisanal amateur explosive devices," targeting two floors of the Hall building and one floor of the Engineering, Computer Science and Visual Arts building, both of which were evacuated on Wednesday morning.

The specific locations were described in the email as "where Muslims hang out," and the sender clarified that the bombs are "not meant to kill anybody. The only aim is to injure some Muslim students." According to Global News, the email demands a halt of "religious activities of all kinds on campus."

McGill University reportedly received a similar message, according to CBC. "The campus community radio station at McGill University — was among the media outlets to receive the letter threatening Muslim students at Concordia," CBC reported.

"Since we will [spread] our fight to McGill too, we at C4 decided to give you a heads up of the emergency situation at Concordia University," the email read, and was signed by an individual who self-identified as the "C4 co-ordinator."

"Things have changed," now that President Donald Trump has taken office in the U.S., according to the email. The email comes as 101 bomb threats have been recorded, targeting Jewish institutions across the United States in 33 states so far.

Classes at Concordia have been cancelled until 6 p.m. local time. A statement on the school's website noted, "Concordia is now cooperating with police who are now on-site investigating a potential threat in these buildings."

See below for what appears to be a copy of the email sent by the group.

It’s difficult to scroll through social media right now without seeing at least one post mentioning Johnny Depp, Amber Heard and the defamation trial that began on April 11, 2022.

Depp is suing ex-wife Heard for defamation over an op-ed she penned for the Washington Post in 2018. Depp says that by presenting herself as a victim of domestic violence, Heard has tarnished his name, despite not naming him in the piece. He is seeking US$50 million in damages.

Republicans believe that Hungarian strongman Viktor Orbán has figured out the “secret sauce” to turn a republic into a hard-right oligarchy, and today they’re in Budapest drinking deep from his insights on the fine points of destroying democracy.

In two speeches this week, Orbán laid out his Hungarian version of the racist American “Great Replacement Theory,” trashed Jewish financier George Soros as a proxy for Jews around the world, reiterated the importance of having friendly rightwing billionaires seize control of a nation’s media, and attacked societies that allow gay marriage and tolerate trans people as engaging in “gender madness.”

Authoritarians are seldom swayed by majoritarian arguments, which is why far-right Christian nationalists in the United States couldn’t care less what the majority of Americans think about overturning Roe v. Wade or the fact that more voters preferred now-President Joe Biden in 2020’s presidential election. In Russia, similarly, President Vladimir Putin obviously remains committed to the invasion of Ukraine regardless of what all his opponents think.

According to CNN reporters Katie Bo Lillis, Zachary Cohen and Jeremy Herb, intelligence officials in the U.S. “are skeptical that any change in Russian public opinion against the Kremlin's war in Ukraine — even a dramatic one — would have an effect in persuading Russian President Vladimir Putin to end the conflict, according to multiple sources familiar with the latest intelligence.”