‘This isn’t fake news -- this actually happened to us’: Sen. Mark Warner lays out case against Russia 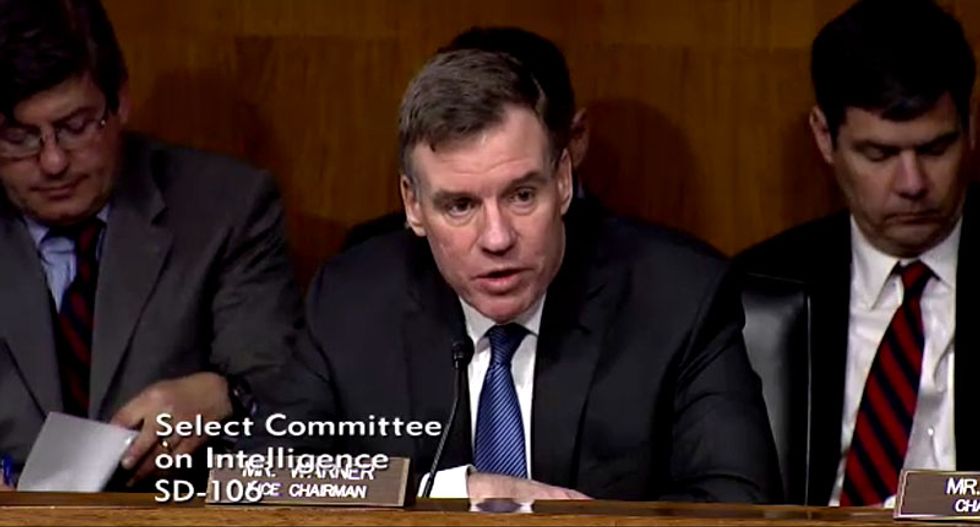 Sen. Mark Warner (D-VA), the ranking Democrat on the Senate Intelligence Committee, explained how Russia interfered with the U.S. presidential election -- and he wondered why President Donald Trump seemed disinterested in probing what happened.

The Virginia Democrat opened Thursday's public committee hearing, which he said was highly unusual given the classified nature of some of the evidence, with a listing of facts that he argued showed Russian President Vladimir Putin ordered the interference to benefit Trump.

Warner said intelligence officials had determined Russia bombarded social media with "fake news" and "bots" to influence political discourse, "blurring our faith in what is true and what is not," using propaganda outlets like RT and Sputnik.

"This fake news and disinformation was then hyped by the American media echo chamber and our own social media networks to reach and potentially influence millions of Americans," Warner said. "This is not innuendo or false allegations. This is not fake news -- this is actually what happened to us."

He also explained that Putin directed hackers to steal data from the Democratic Party that was intended to hurt Hillary Clinton and benefit Trump.

"This information is not about whether you have a 'D' or an 'R' next to your name," Warner said. "It is not about re-litigating last falls' election. It is about clearly understanding and responding to this very real threat."

Warner said an individual associated with the Trump campaign, presumably Roger Stone, had accurately predicted what stolen information would be posted online by WikiLeaks and claimed to be in contact with a hacker believed to be linked to Russian intelligence.

However, he said this partisan preference wasn't likely to hold during the midterm elections or beyond, and he warned lawmakers they could become targets of the same type of disinformation campaigns.

"There is nothing to stop them from doing this again in 2018, for those of you who are up (for re-election), or in 2020, as Americans again go back to the polls," Warner said.

He also pointed out that the GOP platform was "mysteriously watered down" during the convention to benefit Putin, and the senator said no one had explained who made the changes or why.

Warner then showed that Trump's campaign chairman and national security adviser each stepped down due to their suspicious contacts with Russia.

The senator wondered why the president didn't seem especially eager to examine what had happened -- which raised his suspicions about Trump.

"I would hope that the president is as anxious as we are to get to the bottom of what happened, but I have to say editorially that the president's recent conduct, with his wild and uncorroborated accusations about wiretapping and his inappropriate and unjustified attacks on America's hardworking intelligence professionals, does give me grave concern," Warner said.