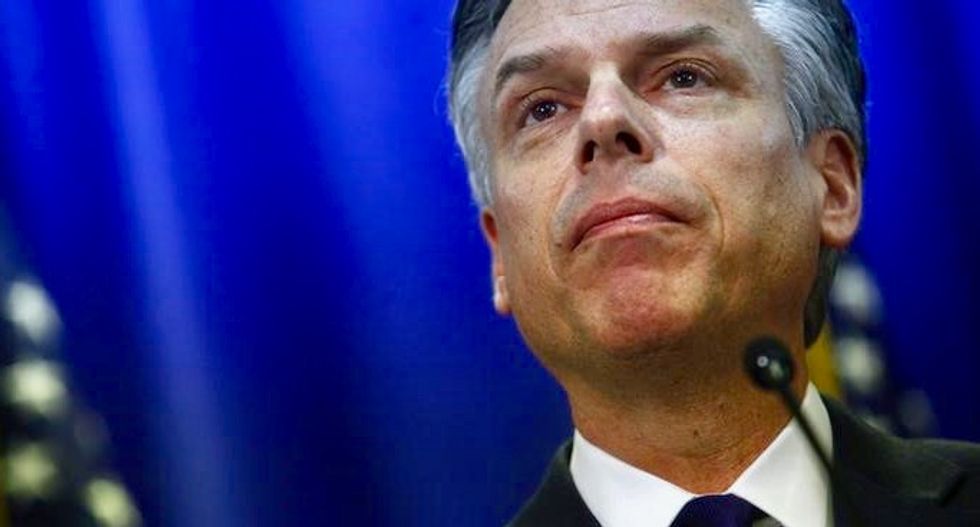 Reports that Jon Huntsman will become the next U.S. ambassador to Russia stirred anxiety in Moscow on Thursday, with one politician calling him a hawk and pro-Kremlin media recalling what they said was his worrying history of hostile rhetoric.

An official in U.S. President Donald Trump's administration said on Wednesday that Huntsman, a one-time Republican presidential candidate and ambassador to China and Singapore, had accepted Trump's offer to represent the United States in Moscow, a move that needs Senate confirmation.

With U.S.-Russia relations at their worst since the Cold War and Russia a politically toxic issue in Washington as hacking and influence-peddling scandals threaten to erupt, Russian officials are looking for clues as to where the troubled relationship might be going.

"The choice of nominee for U.S. ambassador in Moscow says a lot," said Alexei Pushkov, a Senator who has in the past said he hoped that Trump could deliver better U.S.-Russia ties.

"Huntsman used to be the head of the Atlantic Council, where harsh criticism of Russia has become the norm. He is definitely not a dove."

Trump was mainly surrounding himself with people who did not want to improve relations, Pushkov complained. "It will make the search for common ground harder," he said.

Russian officials watched with dismay last month as Trump replaced his national security adviser, Michael Flynn, who they saw as a possible ally, after a Russia-related scandal. He was replaced by Army Lieutenant General H.R. McMaster, who is more hawkish on Russia.

In another move likely to disappoint Moscow, two officials told Reuters the administration has offered the job of top Russia adviser at the National Security Council to Russia scholar Fiona Hill, a leading critic of Russian President Vladimir Putin.

Huntsman, in Russian eyes, was therefore the latest in a series of setbacks.

Communist party leader Gennady Zyuganov, in lock-step with the Kremlin on most foreign policy issues, steered his social media followers to an article describing Huntsman as someone who hated Russia.

The article quoted Huntsman as having once said that forging better ties with Moscow would require Washington to turn a blind eye to Russia's patchy record on rights and democracy.

That was a reference to a comment Huntsman made in 2012 when he likened Barack Obama's efforts to reboot ties with Russia to "a Potemkin village."

The Kremlin was more circumspect. Dmitry Peskov, Putin's spokesman, said Moscow would welcome any U.S. ambassador who was "a convinced proponent" of the idea of establishing a dialogue with Russia.

His caution reflects how far the Kremlin has had to scale down its expectations of a rapprochement. The Russian parliament erupted in applause when it learned Trump had won the U.S. election, amid hopes he might ease sanctions imposed over the Ukraine crisis.

The mood has changed dramatically since, with state television scaling back its Trump coverage and the Kremlin, which cannot get clarity on when Putin might meet Trump, adopting a wait-and-see approach.