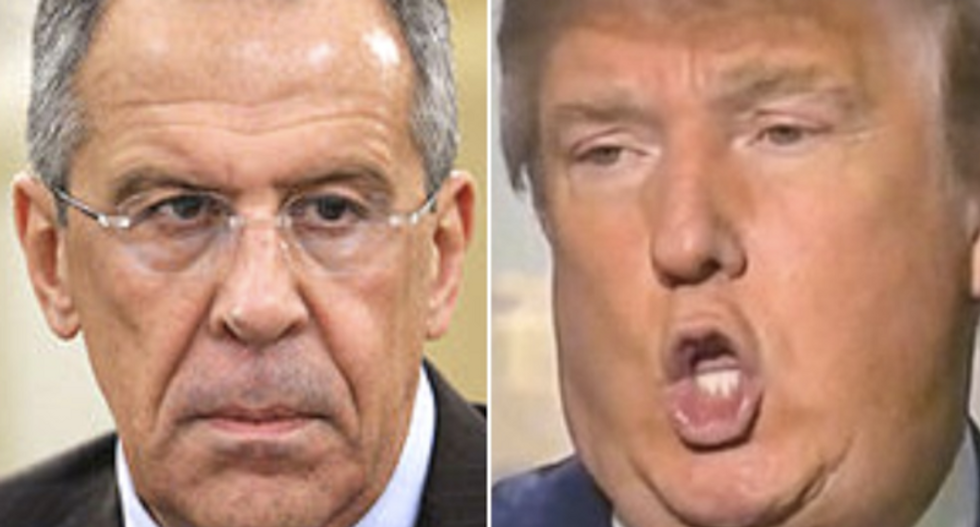 President Donald Trump and the Russian foreign minister used the same phrase to push back against the widening scandal engulfing the White House.

Both Trump and Sergei Lavrov, the Russian foreign minister, issued statements after U.S. Attorney General Jeff Sessions recused himself from overseeing the investigation of alleged ties between the Republican presidential campaign and Russia.

Trump said in his statement late Thursday that Sessions was "an honest man" who "did not say anything wrong" by denying during his Senate confirmation any contacts with Russian officials -- despite having twice met with Russian ambassador Sergey Kislyak during the campaign.

"He could have stated his response more accurately, but it was clearly not intentional," Trump said in his statement.

"This whole narrative is a way of saving face for Democrats losing an election that everyone thought they were supposed to win," the president continued. "The Democrats are overplaying their hand. They lost the election and now, they have lost their grip on reality. The real story is all of the illegal leaks of classified and other information. It is a total witch hunt!"

"I can cite the media that say all this is very much reminiscent of a witch hunt and the McCarthyism era which we all thought was long gone," Lavrov said.

"Our ambassador is accused of meeting with the U.S. politicians who opposed the Obama administration," Lavrov added. "This is the essence of the accusations, to be honest. We don’t want to act the same and we won’t do that. If we applied the same principle to (the U.S.) Ambassador to Russia (John) Tefft, this would be real fun."

Kremlin spokesman Dmitry Peskov said Thursday that Moscow is not aware of any meetings between Sessions and Kislyak and does not wish to interfere in the "emotionally charged" scandal.

Sessions has said, after the meetings were reported, that he spoke twice with Kislyak in his official capacity as a U.S. senator, although the Wall Street Journal reported that he used Trump campaign funds to travel to one of those meetings during the Republican National Convention.

At least two other members of the Trump campaign -- national security advisory committee members J.D. Gordon and Carter Page -- reportedly met with Kislyak at an event during the RNC in Cleveland.

CNN has reported that U.S. intelligence officials consider Kislyak one of Russia's top spies and a spy recruiter in Washington, although the Kremlin denies those allegations.