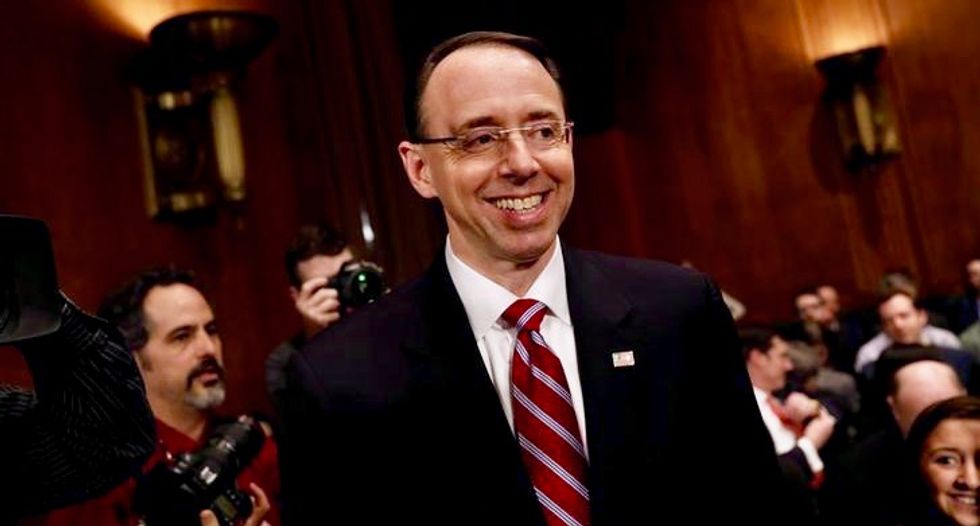 The lawyer who will take control of an investigation into Russian meddling in last year's U.S. presidential election, if he wins Senate confirmation to become deputy attorney general, rebuffed Democrats' demands on Tuesday for the appointment of a special prosecutor in the case.

Rod Rosenstein, now U.S. Attorney for Maryland, faced tough questioning, especially from Democrats, at a Senate Judiciary Committee hearing on his nomination by President Donald Trump to fill the Justice Department's No. 2 job.

Coming amid persistent questions about ties between Trump's presidential campaign and Russia, Rosenstein's nomination has catapulted him into the center of an issue that Trump has been unable to put behind him in his first six weeks in office.

He said he could not commit to that approach before learning the facts of the case. “My view is that I have a responsibility to not take the job conditional on how I [will handle] a particular case,” Rosenstein said.

Attorney General Jeff Sessions recused himself from the politically-charged inquiry last week after admitting he met twice with Russian Ambassador Sergei Kislyak during the campaign. Sessions had previously testified he had no contact with Russian officials.

U.S. intelligence agencies concluded last year that Russia hacked and leaked Democratic emails during the election campaign as part of an effort to tilt the vote in Trump's favor. The Kremlin has denied the allegations.

Democrats at the hearing said only a special prosecutor could ensure that the investigation would be free of pressure from Trump, who has accused officials in former Democratic President Barack Obama's administration of trying to discredit him with questions about Russia contacts.

Trump called frequently during his campaign for improved relations with Russia. U.S.-Russian relations have been deeply strained in recent years over Moscow's military interference in Ukraine, military support for President Bashar al-Assad in Syria and President Vladimir Putin's intolerance of political dissent.

Republicans at the hearing said it was too soon to know whether a special counsel was appropriate in the case.

Rosenstein noted that former Attorney General Loretta Lynch had been asked to appoint a special prosecutor when the allegations first came to light. He said she rejected the request and chose to use career prosecutors in the case.

Rosenstein has experience working for a special counsel on investigations involving the presidency. In the mid-1990s he was part of independent counsel Kenneth W. Starr's team of prosecutors who investigated Bill and Hillary Clinton.

The 26-year Justice Department veteran is seen by many current and former department officials as a politically neutral pick. "Political affiliations are irrelevant to my work," Rosenstein told the committee.

"Mr. Rosenstein should commit to naming a special prosecutor to look into the Trump campaign’s ties to Russia," said Democratic Senator Chuck Schumer in a statement.