WATCH: Chris Hayes fact-checks GOP Rep on how many of his constituents are actually covered by Obamacare 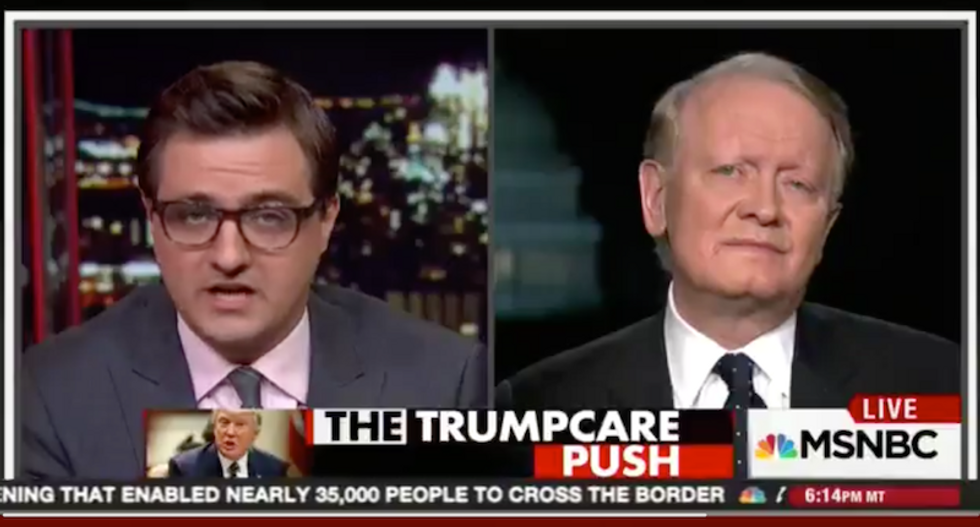 On Thursday night, GOP Congressman Leonard Lance of New Jersey joined Chris Hayes in a discussion about Obamacare and the GOP's proposed replacement plan. Hayes asked the politician if he could give an estimate of how many of his constituents are covered by the Affordable Care Act.

The MSNBC host also repeatedly asked Lance how many hearings the House Energy and Commerce Committee held with expert witnesses and testimonies before deciding to move forward with the new health care bill. Lance explained that they had held a 27-hour marathon session.

"Congressman, you're talking about maybe 15 million people losing health insurance and you're saying that 27 hours going through the night is sufficient," Hayes countered.

"I think we have to move forward, I suspect when it gets to the Senate, there will be a discussion there," Lance replied. That's when Hayes asked him, "How many people in your district are on the exchanges?"

Hayes promptly fact-checked him, though. "My understanding from Kaiser Family Foundation is it's as much as four times that. I think it's much more like 20,000."

.@chrislhayes asks @RepLanceNJ7 how many hearings the GOP has held on Trumpcare 5 times - he won't answer #inners https://t.co/q6Vxrxpwn8

.@chrislhayes asks ANOTHER GOP Congressman, Leonard Lance, how many of his constituents r covered by Obamacare

He takes a stab, is WAY off pic.twitter.com/751b7wMf3Y