WATCH: Colbert hilariously honors ‘Day Without A Woman’ by imagining 'The Late Show' produced only by men 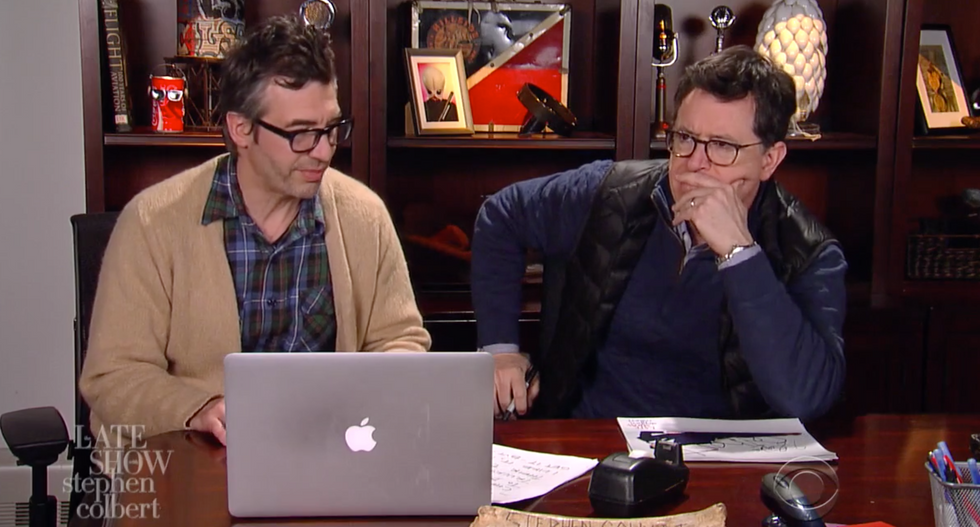 In honor of "Day Without A Woman" on Wednesday, The Late Show with Stephen Colbert offered a poignant reminder of just how vital woman are to the comedy show.

“The following cold open was produced without the help of any of the Late Show’s female staff,” the show’s introduction card read.

In the segment, Colbert and comedian Paul Dinello tried to explain to the audience what ‘crazy’ thing Donald Trump did that day, only to find their storytelling capabilities drastically inhibited by a lack of female staff.

At one point, Colbert suggested they play video of Trump to explain the president's antics, only to find that the “footage department is run by two women.” The host then insists they could act the story out with sock puppets, but unfortunately discovers that “Maggie runs props.” When the pair consider simply explaining Trump’s latest absurdity, Colbert admits, “I don’t know the story, because Gloria runs the research department.”

Colbert and Dinello eventually settle on reading the “script that was written by only the male writers.”

Watch the clip below to find out who “teamed up to drive monster trucks with their penises” in the all-male script: