WATCH: Nunes refuses to say if he canceled hearings over Sally Yates as he's bombarded by reporters 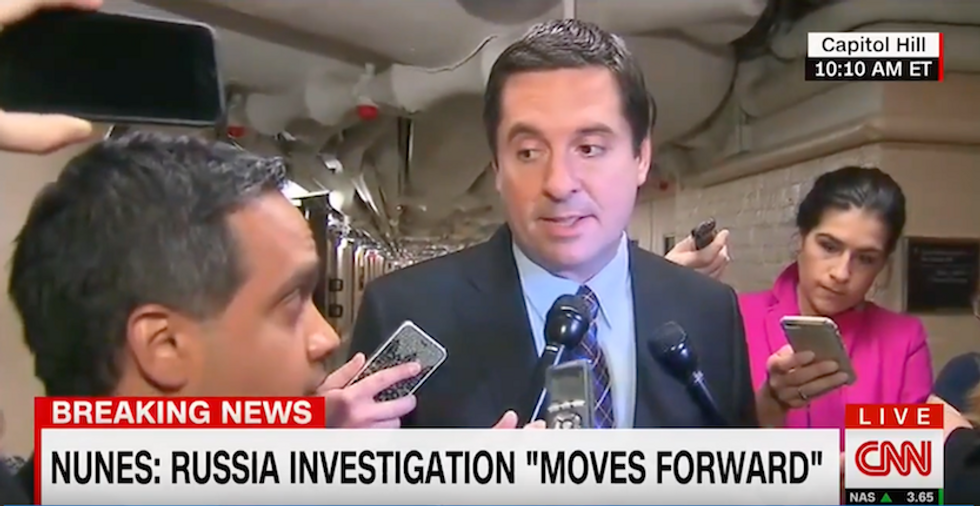 House Intelligence Chairman Rep. Devin Nunes (R-CA) was swarmed by reporters on Tuesday morning with questions about whether he would step aside in an investigation of the Trump campaign's ties to Russia.

On Monday night, House Minority Leader Nancy Pelosi said in a statement, "The Chair of the House Intelligence has a serious responsibility to the Congress and to the country. Chairman Nunes' discredited behavior has tarnished that office. (House) Speaker (Paul) Ryan must insist that Chairman Nunes at least recuse himself from the Trump-Russia investigation immediately. That leadership is long overdue."

Nunes was asked on Tuesday morning about the investigation and whether he will answer calls from Congress to recuse himself.

"We're not going to talk about the investigation. If you have any intelligence questions, I'll brief you at the proper, appropriate time when we have new information, just like I always have been doing," said Nunes.

On Monday night, he was questioned by CNN's Wolf Blitzer about a visit he made to the White House last week the night before briefing President Donald Trump about possible surveillance of the Trump transition team. Nunes went straight to the White House with the new information, bypassing his own committee.

A reporter asked Nunes Tuesday, "They're calling for you to recuse yourself [in Congress], saying that you have a conflict of interest." Nunes replied, "Well, what would that be? Help me understand."

"But are you going to stay as chairman and run this investigation?" asked CNN reporter Manu Raju.

"Well, why would I not? You guys need to go ask them [Congress] why these things are being said," replied Nunes.

"Can this investigation continue with you as chairman?" Raju asked. He noted that Congressional criticism of Nunes is due to him being "too close to the White House," adding he "shouldn't have briefed the president last week," and so he "can't credibly run the investigation."

Nunes replied, "Why would it not? Aren't I briefing you guys continuously and keeping you up to speed?" He added, "You've got to go talk to them. That sounds like their problem."

"Did the Trump administration seek to have Sally Yates not testify before your committee?" one reporter later asked after Nunes canceled hearings this week. The House panel had scheduled to hear from former acting attorney general Sally Yates on Tuesday.

"Look, you guys are just speculating," he replied.