WATCH: SNL's Jeff Sessions faces off with Al Franken to explain why he met with the Russians 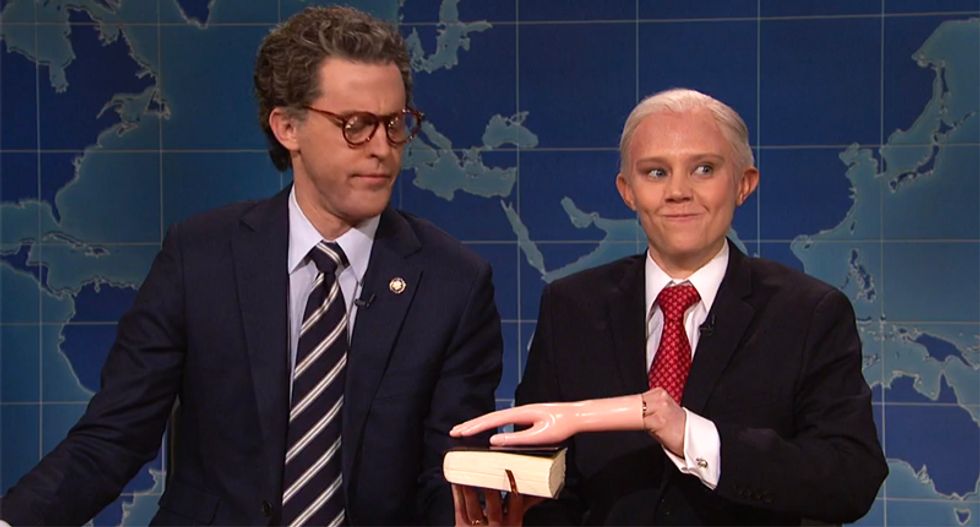 SNL regular Kate McKinnon reprised her Attorney General Jeff Sessions impersonation on Weekend Update, in a face to face meeting with fellow cast member Alex Moffat playing Sen. Al Franken -- and then proceeded to dodge questions once again about meeting with the Russians.

“Always a pleasure to see you, Al,” Sessions told Franken, who replied, “The pleasure is mine. This ordeal has been fun for everyone."

“Al and I are actually great friends,” the Attorney General explains, adding he took Franken whitewater rafting on the Chattahoochee River, and that Franken taught him about "Jew stuff."

Turning to Sessions' testimony in his confirmation hearings, Sessions explained, “It is true that you caught old ‘Brer’ Sessions in a liar patch again.”

Franken then asked Sessions to place his hand on a Bible before testifying, only to have the AG use a mannequin hand, explaining: “You did not specify my biological hand.”

“Why did you deny meeting with Russian officials?” Franken asked.

“I was all distracted,” McKinnon as Sessions answered. “I was trying to evade these dastardly accusations of being a racist, which I’m not. Where I live, racism is simply part of the landscape.”

“And where do you live?” asked Moffat as Franken.