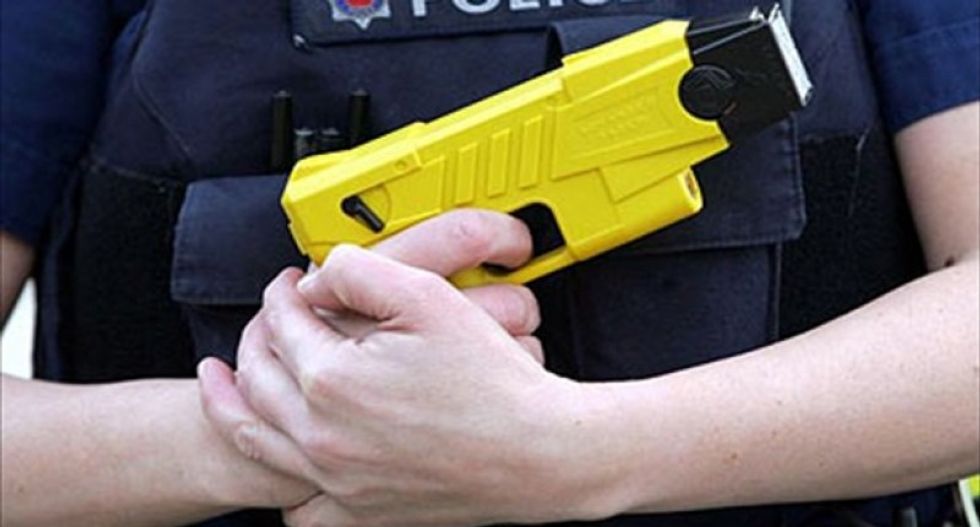 Sheriff's deputies in Colerain Township, OH got caught on video using a Taser on a 12-year-old girl who refused to put on roller skates at a skating rink.

According to WCPO.com, Hamilton County Sheriff's Office spokesman Mike Robison said the unnamed girl was out of control and attacked the deputies after being asked to leave the premises of The Skatin' Place on Saturday night.

Witness video showed the two deputies manhandling the girl and throwing her to the floor, then using jolts from Taser to subdue her. The clip went viral after being uploaded to social media on Sunday, leading to questions for the sheriff's office as to why a stun device was used on a minor.

Fox19.com said that the girl was at the rink but not wearing skates. Skatin' Place staff reportedly told her to put on skates within a certain time limit or leave the premises. She refused.

The two deputies intervened, ordering the girl to leave the building.

A press release from the sheriff's department claims that "using extremely disrespectful language she vehemently refused to comply" and that “initial indications are the deputies reacted consistent[ly] with policies and procedures.”

"When the Deputies attempted to escort her from the premises, she struck a Deputy twice in the face, and proceeded to continue to kick both Deputies. She was given several verbal commands to stop resisting which she also ignored," the statement continued.

Watch video of the confrontation:

Watch a news report about the story: