'What the hell is going on here?': Dem lawmaker lays waste to Trump team's 'lying' about Russia 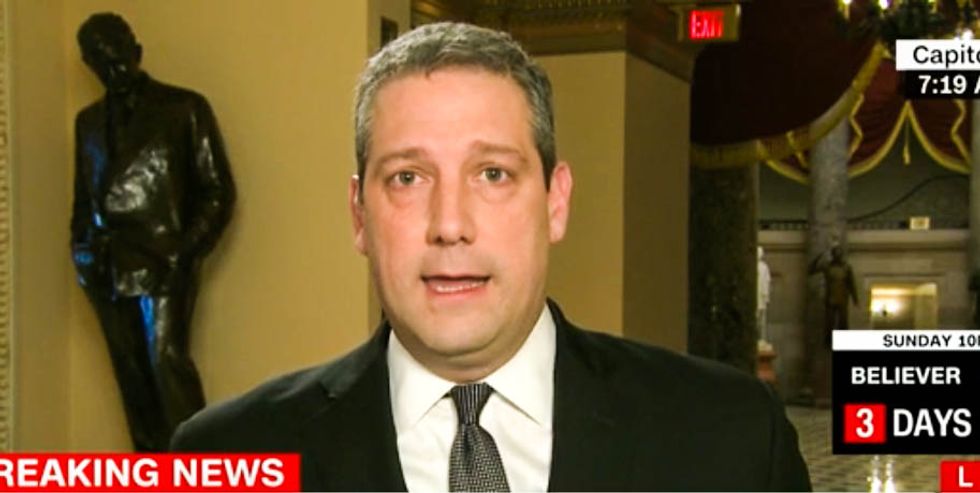 Rep. Tim Ryan (D-OH) blistered the Trump administration for allegedly "lying" about its members' contacts with the Russian government during a heated appearance on CNN Thursday morning.

Reacting to news that Attorney General Jeff Sessions had failed to disclose two meetings with Russian Ambassador Sergey Kislyak during last year's presidential campaign at his Senate confirmation hearing, Ryan said that Sessions should resign, while adding that he was absolutely flabbergasted by the level of dishonesty surrounding the White House's relationship with Russia.

"You put this in addition to Flynn [lying], Trump has not shown is taxes, you go back to [former Trump campaign chairman Paul] Manafort in the summer and his relationship to Russian folks in Ukraine," Ryan said. "What the hell is going on here? Why is everybody lying?"

CNN's Chris Cuomo tried to get Ryan to back off of his accusations of "lying" by noting that he would have to prove Sessions intentionally didn't tell the full truth during his confirmation hearing.

Ryan, however, said Sessions absolutely should have disclosed his two meetings with Kislyak.

"I assume that he knew he had these two meetings," Ryan said. "And then he's testifying, before the United States Senate, in a confirmation hearing, in which telling the truth is essential to whether you'll get confirmed by the Senate, and he completely misled [Democratic Senator] Al Franken."