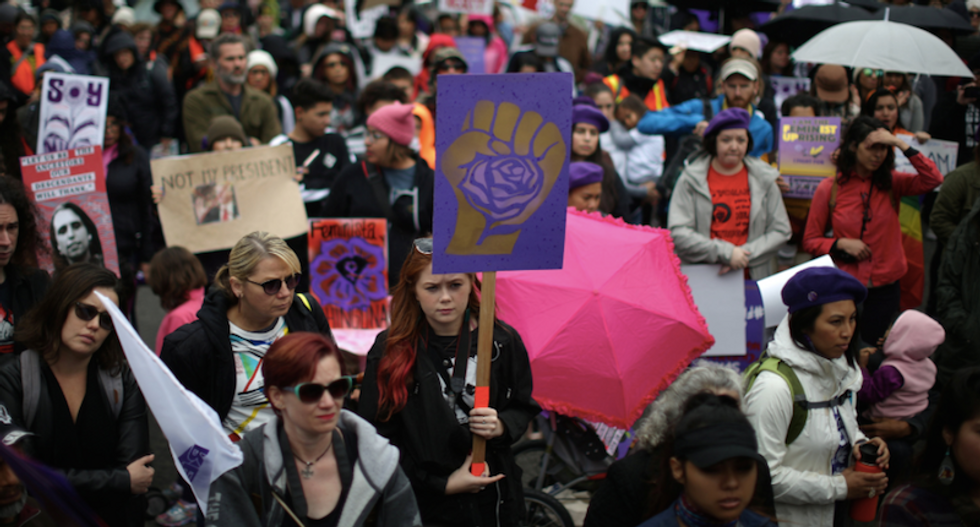 People listen to speakers in the rain at a rally for International Women's Day in Los Angeles, California, U.S., March 5, 2017. (REUTERS/Lucy Nicholson)

Women in the United States plan to use International Women's Day on Wednesday to stay off the job and stage demonstrations across the country in an effort to seize on the momentum built from the massive marches held a day after President Donald Trump's inauguration.

On "A Day Without a Woman," those who are able to do so will stay away from work or school, much as immigrants did on Feb. 16 to protest Trump's immigration policies.

All are part of the series of anti-Trump demonstrations that have taken place since the day after his Nov. 8 election.

Objectives of Wednesday's events include calling attention to the gender pay gap in which women trail men, and deregulating reproductive rights.

"For years and years, March 8 has been International Women's Day, and it has been a happy, happy day, which is fine," said Terry O'Neill, president of the National Organization for Women. "But the political climate that we find ourselves in right now requires us to have political power."

American women on average earn 79 cents for every $1 that men make, and African-American and Latina women make even less, O'Neill said. Since women account for two-thirds of all minimum wage workers, lifting the hourly wage would significantly narrow the pay gap, she said.

The minimum wage has been stuck at $7.25 at the federal level since 2009, although it is higher in many states.

Organizers are attempting to repeat tactics from the Jan. 21 women's march on Washington and other cities that came together largely through social media.

Women make up 47 percent of the U.S. civilian labor force. If all of them stayed out of work for the day, it would knock almost $21 billion of the country's gross domestic product, the liberal leaning Center for American Progress estimated.

Organizers, however, realize that many women lack the motivation or cannot afford to take a day off and are urging women to limit their shopping to female-owned businesses or to wear red.

Several schools, including at least two sizeable school districts in Virginia and North Carolina, have canceled classes because a large number of teachers requested the day off.