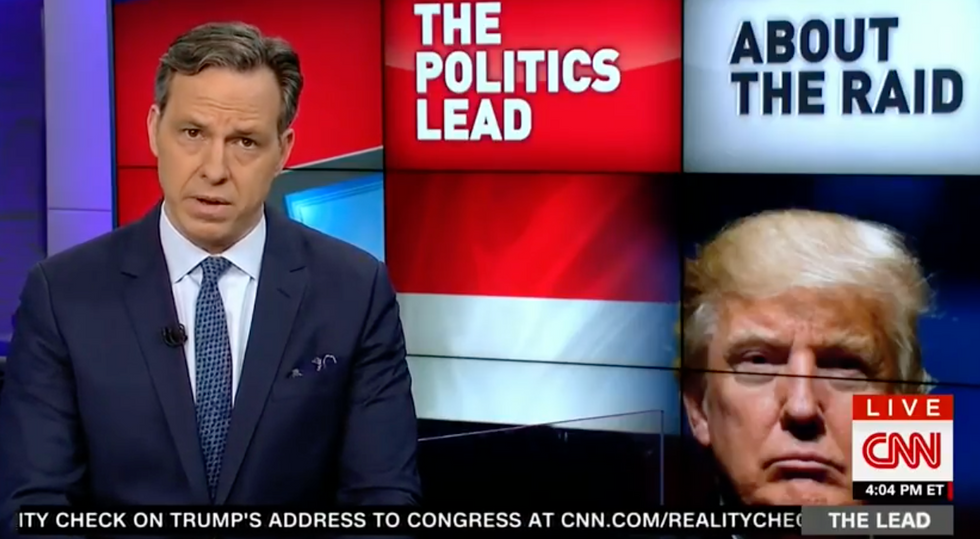 CNN’s Jake Tapper on Wednesday issued a brutal fact-check of Donald Trump’s first speech to a joint session of Congress,” noting while the president’s “words sounded great,” they do not erase the “thousands” of deeds he’s done to the contrary.

”But, it’s important for all of us to focus on not only special moments in big speeches like that, but also on larger policy implications,” Tapper said. “Words matter, deeds matter as well.”

Tapper pointed out that the Trump administration rebuked Sen. John McCain (R-AZ) for suggesting the raid was not properly executed. McCain has previously argued that anytime an American life is lost, it’s hard to call a mission a success, provoking White House Press Secretary Sean Spicer to demand an apology from the Arizona senator.

“Questioning the planning and wisdom behind any military operation does not do a disservice to the heroes who conducted the operation. Quite the contrary—it honors them,” Tapper said, arguing the legislative branch has an “obligation” to conduct oversight over the executive branch.

Tapper then criticized the president’s refusal to shoulder blame for the Yemen raid, noting Trump’s claim that “they lost Ryan”—“they” being his generals and the military, not the president himself.

“They didn’t lose him, we did. We all did,” Tapper said, arguing Trump’s role as Commander-in-Chief should prompt the president to consider his culpability in Owen’s death.

“We lost Ryan,” Tapper continued. “Accountability and responsibility, these are important principles.”

Tapper later blasted the president for his sluggish disavowal of racism and anti-Semitism, arguing that while it was wonderful to hear Trump reject hate, it took a year and a half for him to provide “any full-throated condemnation of white nationalists and anti-Semites who supported him.”

“Words, in a big, important speech are important, no doubt,” Tapper continued. “These words, they sounded great … The lovely words of a prepared speech however, cannot erase, extemporaneously, the deeds—thousands of them—that have run contrary to those aspirations.”

“Sometimes you don’t fee the whiplash until the day after,” he added.

Missouri man to be executed for murder of police officer

A man convicted of murder is to be put to death in the midwestern US state of Missouri on Tuesday in an execution that his 19-year-old daughter has been barred from witnessing.

Kevin Johnson, a 37-year-old African American man, was sentenced to death for the 2005 murder of a white policeman in a suburb of St Louis.

All regions of the world saw water extremes last year -- both floods and droughts -- and billions of people had insufficient freshwater, the United Nations said on Tuesday.

The Democrat’s surprising strength in the midterms has been framed mostly as a rebuke of Republicans’ attack on abortion rights and on democracy. The GOP’s flirtation with imperial oligarchic Russian leader Vladimir Putin has, in contrast, received little attention.

That’s not exactly a mistake. Foreign policy rarely drives many votes, and the war between Russia and Ukraine was never a top issue for voters or for candidates on the campaign trail.