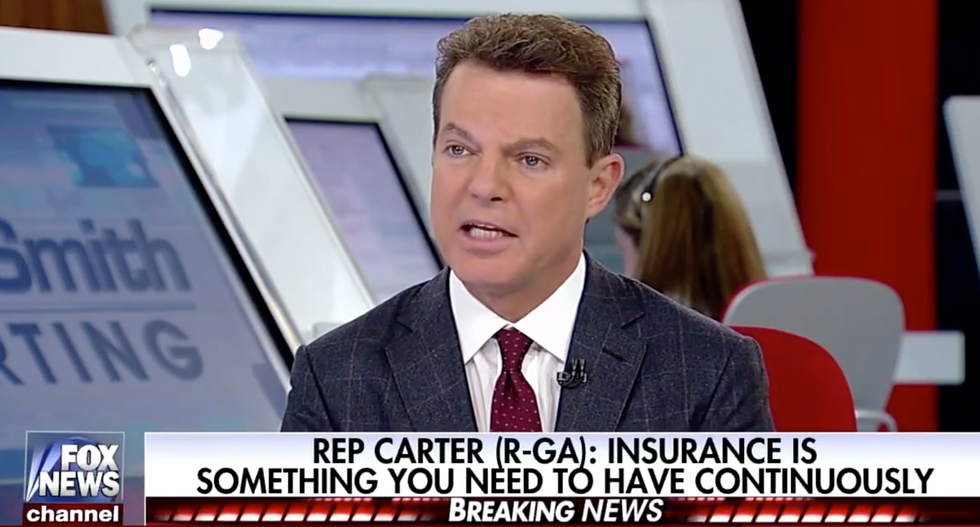 Fox News host Shep Smith on Tuesday hammered Rep. Buddy Carter (R-GA) over the House Republican healthcare plan, demanding to know how many people will lose insurance as a result of the bill.

The bill was released Monday without any score from the Congressional Budget Office, which is expected to reflect that the new bill will not cover more people than the Affordable Care Act—despite assurances to the contrary made previously by Republican leaders.

Two committees are expected to hold meetings Wednesday about the bill—without a score from the CBO—a point Smith confronted Carter on.

“It’s the CBO’s job as a nonpartisan group to look at a bill that Congress is trying to pass, work through it, figure out what it’s going to cost, and report back,” Smith said, "You’re pushing this through … before the CBO scores it. So right now we don’t know how much this will cost and we don’t know how many people will lose insurance, right?”

Carter responded with a GOP talking point about Obamacare failing as Smith pressed, “Why not wait?”

“You can’t wait one week for the Congressional Budget Office to score this?” Smith asked the Republican lawmaker. “If not, why not?”

Carter insisted the CBO will score the bill before the House votes on it, prompting Smith to point out Republicans could lack the votes to push the healthcare replacement plan through.

“People on your right say what you’ve done is added an entitlement,” Smith said, listing Republican lawmakers who’ve expressed hesitation over the bill. He then asked Carter about how the bill’s plan—which targets citizens whose insurance lapses for two months—differs from Obamacare.

“You’ve eliminated that penalty under TrumpCare, but you’ve replaced it with a new thing, and that is if a family … has insurance … and your insurance lapses for two months, then the insurance company can charge you 30 percent more than you were paying before,” Smith explained.

“Critics will say instead of the mandate, you’re putting the cost off on those whose insurance lapsed,” he added.

The Fox News host then circled back around to press Carter on how many people will lose their insurance under the new plan.

“We don’t know how many people will lose insurance as the result of this bill,” Smith said. “When will we know?”

“First of all, what will happen—“ Carter began, trying to dance around the question.