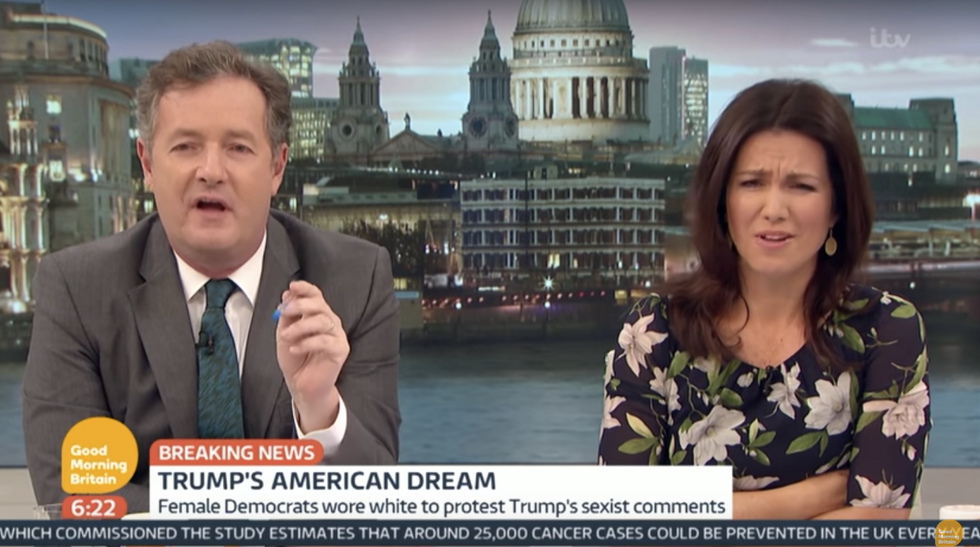 Erstwhile CNN host Piers Morgan got called out on his uncritical, open-armed acceptance of Pres. Donald Trump's speech and of his presidency so far on U.K. morning show "Good Morning, Britain" on Wednesday.

Mediaite.com reported that Morgan was appearing alongside conservative pundit Kritin Tate and Alabama Judge Eric Guster in a panel discussion of Trump's first address to Congress on Tuesday night.

After Tate said that she awarded Trump a grade of "A-plus plus plus plus" on the speech, Guster said that his tone might have softened, but Trump is still dividing people along racial lines and demonizing immigrants.

"He claimed that he wanted to bring people together," Guster said, "but what he's doing is dividing us even more in the most unpresidential way imaginable. He's striking fear, just like Hitler's Germany."

"Piers, you drink his bathwater," Guster said, "so you think everything he does is great, but you're wrong."

Morgan assured Guster and the TV audience, "I do not drink Donald Trump’s bath water, though I’m sure it tastes delicious.”

Morgan has clashed with other public figures over Trump and the backlash against the former reality TV star turned president. He skirmished with New York Times columnist Charles Blow, author J. K. Rowling and bashed actor Ewan MacGregor over his support for the global women's marches on Jan. 21.