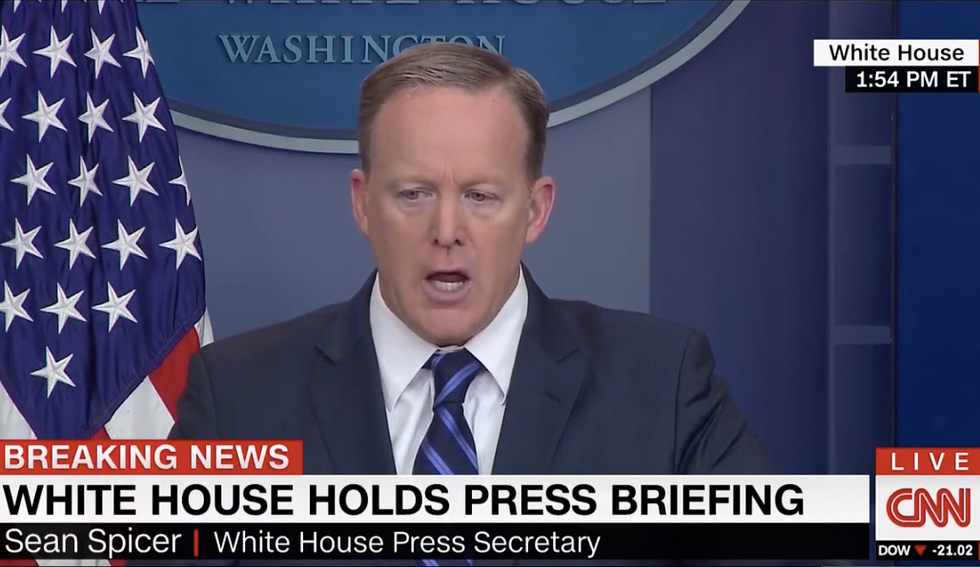 At his Friday afternoon White House briefing, President Donald Trump's Press Secretary Sean Spicer made the jaw-dropping assertion that former Secretary of State Hillary Clinton is to blame for the current imbroglio with Russia and its president Vladimir Putin.

In the process of deflecting a question about the Senate Intelligence Committee's probe into Russian interference in the 2016 election, Spicer said, "As we've said before, when you talk about Russia in particular, everyone who has been briefed on this subject, from Republican to Democrat to CIA, former Obama administration's Clapper, Brennan, you name it, all of those people come back with the same conclusion and I think that's important that there's been no evidence of the president's campaign and Russian officials."

Presumably, Spicer meant to say the words "collusion between" but he did not.

He continued, "It was Hillary Clinton who was the architect of the last administration's failed 'Reset' policy. She told Russian state TV it was designed to strengthen Russia. That was their goal, to strengthen Russia. She used her office to make concession after concession, selling off one-fifth of our country's uranium, paid speeches, paid deals, getting personal calls from Vladimir Putin. If you really want to talk about a Russian connection and the substance, that's where we should be looking, that, not there."

The claim that Clinton "gave up" 20 percent of the country's uranium is a Trump canard that PolitiFact rates as "Mostly false."

The reference is to Russia’s nuclear power agency buying a controlling interest in a Toronto-based company. That company has mines, mills and tracts of land in Wyoming, Utah and other U.S. states equal to about 20 percent of U.S. uranium production capacity (not produced uranium).

Clinton was secretary of state at the time, but she didn’t have the power to approve or reject the deal. The State Department was only one of nine federal agencies that signed off on the deal, and only Obama had the power to veto it.

For a statement that contains only an element of truth, our rating is Mostly False.