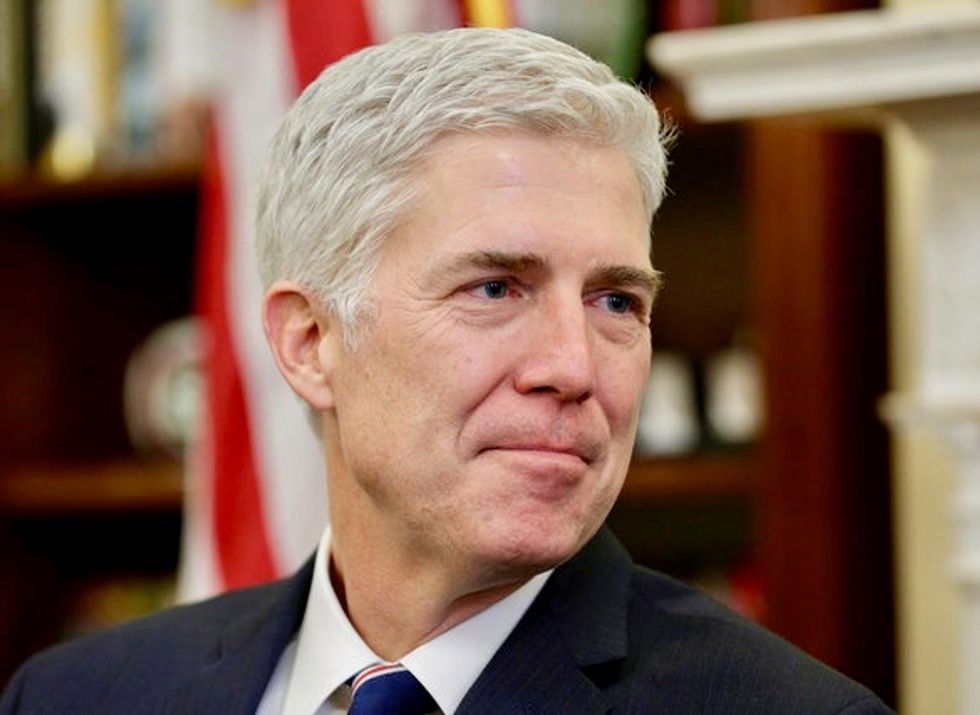 Newly appointed conservative U.S. Supreme Court Justice Neil Gorsuch helped clear the way for Arkansas to hold its first execution in 12 years, a sign of the challenges facing other inmates seeking to block their executions next week.

In his first recorded vote, President Donald Trump's pick for the court sided as expected with its renewed conservative majority. The justices voted 5-4 to reject an emergency application brought by several inmates before Arkansas executed convicted murderer Ledell Lee.

Lee's lethal injection for the 1993 beating death of Debra Reese was the only one carried out so far by the state this month, despite an original plan to execute eight inmates in April before its supply of one of the three drugs used expires.

The executions would be the most by any state in the shortest period since the Supreme Court reinstated capital punishment in the United States in 1976. Four of those executions have been indefinitely delayed by stays for matters including DNA testing, clemency consideration or to allow for a decision in an upcoming U.S. Supreme Court case.

Gorsuch's vote could again be crucial next week when Arkansas plans to execute three more inmates.

On Monday, the state will try to put two inmates to death on the same day, something that has not been done in the United States in 17 years. Arkansas also plans a single execution for Thursday.

As a conservative justice in the mold of the man he replaced, Antonin Scalia, Gorsuch is seen by most court-watchers as unlikely to undermine the death penalty.

Kent Scheidegger, a lawyer with the pro-prosecution Criminal Justice Legal Foundation, said Gorsuch is "not one who will further delay justice when it has already been badly delayed merely because the lawyers for a death row inmate bring weak claims at the last minute."

The court has rejected stays for the eight men, including Lee. Their lawyers have argued that Arkansas' rush to the death chamber amounted to cruel and unusual punishment, and violated the inmates' right to counsel and their right to access the courts and counsel during the execution process.

What a possible Gorsuch vote means for the upcoming Arkansas executions depends largely on the individual legal issues raised by the inmates and whether lower courts intervene. The Supreme Court’s default approach to emergency applications is to deny them, whether from a state or a prison inmate.

There may be further indications on how Gorsuch will approach such cases on Monday, when the court hears oral arguments in a death penalty case from Alabama. It concerns inmate James McWilliams, sentenced to death for a 1984 rape, robbery and murder.

The question is whether McWilliams has a right to an independent medical expert to assess whether he is mentally disabled and therefore ineligible for execution.

Two of the Arkansas death row inmates the state had planned to execute this week, Don Davis and Bruce Ward, had their cases put on hold by the Arkansas Supreme Court pending the U.S. high court’s decision in the McWilliams case, due by the end of June.

There are no signs that the U.S. Supreme Court is inclined to tackle the broader question of whether the death penalty is unconstitutional under the 8th Amendment of the U.S. Constitution, which prohibits cruel and unusual punishment.

The court's conservatives, including Gorsuch, would be expected to uphold capital punishment. (For a graphic on the number and method of executions in the United States since 1976, see: http://tmsnrt.rs/20uUlkC)

(Reporting by Lawrence Hurley in Washington and Jon Herskovitz in Austin, Texas; Editing by Colleen Jenkins and Jonathan Oatis)