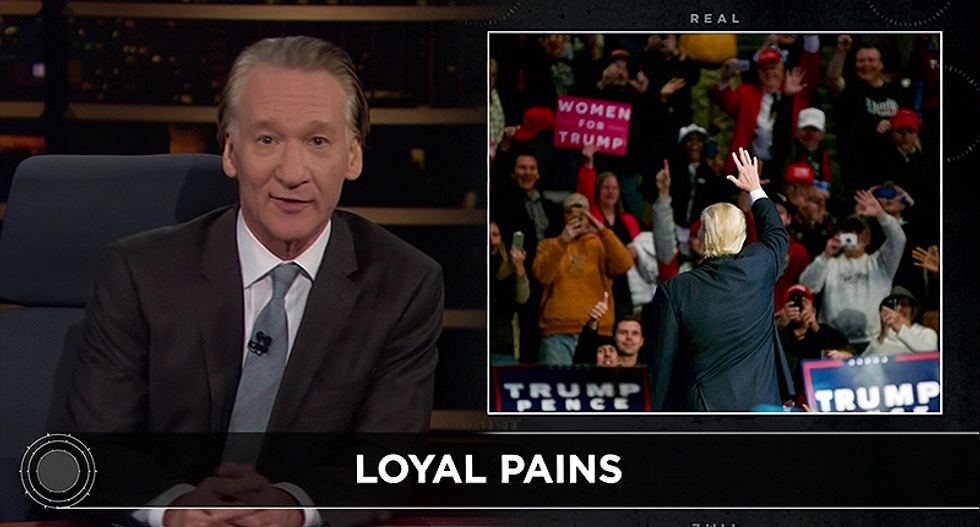 "Trump supporters aren't changing their minds because the problem isn't in the mind. It's lower. It's emotional," Maher said. "He could have Ann Frank's skeleton in his closet. They'd all vote for him again."

Asking why, Maher walked through the cultural crisis many of the undervalued white voters face that Trump managed to harness. "I think it's a gut feeling that the world has changed and they don't like it," he said. "Trump is going to change it back to the way it was."

Speaking occasionally in a thick southern accent, Maher railed against "damn Mexicans" flooding baseball fields like "the parking lot at Home Depot." He was furious about two boys kissing on the kiss-cam. "And did I mention Bruce Jenner has tits now?"

"I ain't no racist, but why does American need to have a black Santa Claus?" Maher asked. "I think I speak for most liberals when I say, I don't care about black Santa. I don't think it's going to make the Little Drummer Boy start cutting himself. But to Trump voters, making Santa black is unthinkable. It'd be like making Jesus Middle Eastern."

Maher revealed that looking at the hit musical Hamilton, many Trump supporters see America's founding fathers turned into a band of hip-hop revolutionaries funkified with their muskets.

"This is why building that stupid wall is still a key issue for them," Maher explained. "It represents keeping out not just immigrants but everything that is new and different and scary and unfamiliar."

Maher said that his new "character" got used to having people bend over backward so that he would feel comfortable. "Trump voters, they're not exactly racists. They just think that everybody who's not white is doing it to show off."

Maher named famous black actors whose names are things like Chiwetel Ejiofor and Lupita Nyong'o. In the 1950s, Maher said that they would be forced to change their names to accommodate whites.

"If you ask a Trump voter what exactly it means to get their country back or make it great again, they can't tell you specifically, but they know the Hollywood Squares was never supposed to look like this," Maher said showing a woman twerking on the new remake of the game show.