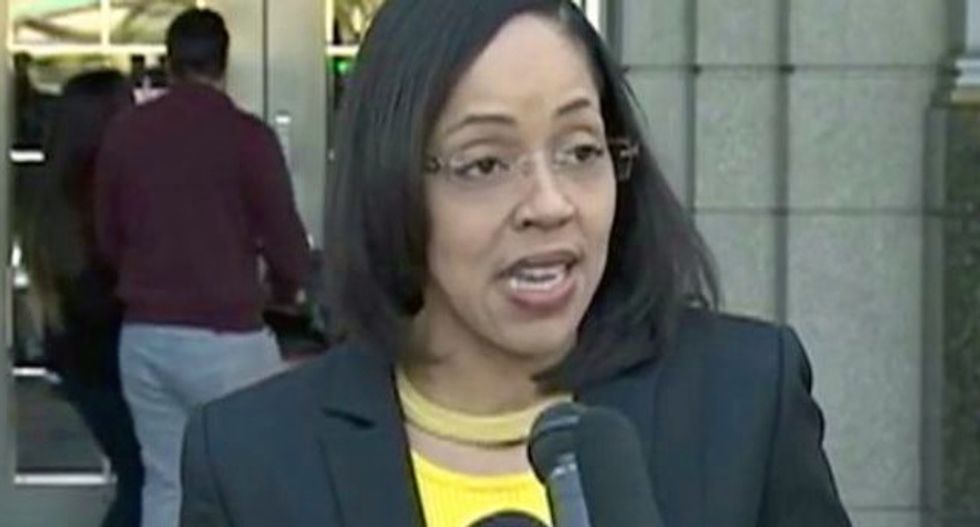 The Orange County Sheriff's Office opened an investigation this week into a noose and racist messages sent to Orange-Osceola State Attorney Aramis Ayala after Ayala said that her division will no longer pursue death penalty sentences against accused murderers.

"SOONER OR LATER A NI**ER WILL BE A NI**ER," said an all-capital-letters message that arrived in the state attorneys' office on March 20, according to OrlandoWeekly.com.

"The envelope also contained three white business cards with the words 'You are an Honorary Member of S.P.O.N.G.E.,' on one side and 'Society for the Prevention of Ni**ers Getting Everything' on the other side," wrote Orlando Weekly's Monivette Cordeiro. "The second envelope, received on March 28, contained an index card with a noose made of green twine taped to the card, according to the report."

Eric Edwards -- the chief investigator for Ayala's office -- contacted the court security division of the sheriff's department on Mar. 28 upon receiving the second envelope.

Employees of the Orange-Osceola Attorney's Office said they believe the messages were sent by the same person, but the sheriff's office said that's not yet clear.

"[Ayala] was advised of the envelopes and their contents," said a sheriff's office report. "She believes that the hangman's noose was meant as a threat to her as a public official. She also believes that the envelope received on March 20, 2017, was a racial message and could be determined to be a hate crime."

Ayala is the first black state attorney elected in Florida. On March 16, she said that her office will not pursue the death penalty in the sentencing of murder suspect Markeith Loyd or any other capital cases that come through her office.

Orlando Weekly said that Ayala was the subject of a swift and intense backlash from Republicans and law enforcement officials after the announcement.

One Seminole County Clerk of the Court posted a message to Facebook calling for Ayala to "get the death penalty" herself and be "tarred and feathered if not hung from a tree."

Republican Gov. Rick Scott pulled Ayala off of Lloyd's case following the announcement, saying that she has made it clear that she won't "fight for justice" in the case. She responded with a pair of lawsuits, one in the Florida Supreme Court and another in the federal court of the Middle District of Florida.

"I have gotten a lot of pushback," Ayala said in a radio interview last week. "I received a noose that was mailed to my office. I received several types of derogatory and racist remarks to me, personally and professionally."