California mosque led by women opens doors to all 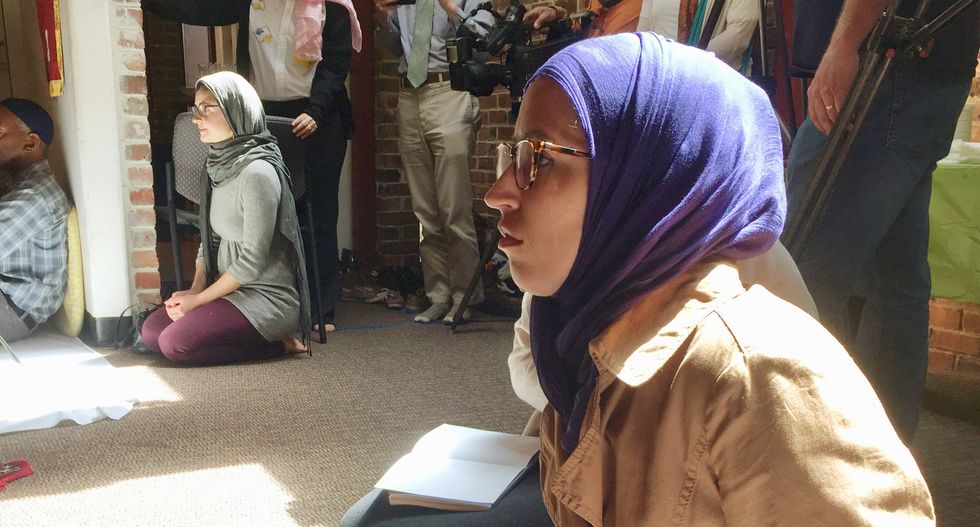 Worshipers sit and listen to prayers and a sermon at the Qal'bu Maryam Women's Mosque which held its first service on Good Friday, at the Starr King School for the Ministry in Berkeley, California, U.S., April 14, 2017. REUTERS/Lisa Fernandez

The second mosque in the United States led solely by women held its inaugural service in California on Friday, but unlike a Los Angeles congregation that opened two years ago, the new female-led Muslim house of worship in Berkeley is open to both genders.

The Qal’bu Maryam Women’s Mosque “is a place for women to worship in the sanctuary, to not be hidden away in dank rooms,” said Rabi’a Keeble, founder of the Berkeley mosque, whose name means “heart of Mary” in Arabic.

Many mosques around the world admit men and women, but most segregate the genders. At the Women's Mosque of America in Los Angeles, male worshippers over the age of 12 are excluded, making the new Berkeley mosque the first of its kind in the country.

“We uplift the female, and just as the Prophet loved women, we must follow in his footsteps and love ourselves and each other,” she said.

Keeble is a 40-something convert from Christianity with a master’s degree in religious leadership from the Starr King School of Ministry, a seminary affiliated with the University of California, Berkeley which has donated space for the mosque.

At Qal'bu Maryam, there is no imam, as the cleric who conducts worship at a mosque is called. Rather, female lay leaders will rotate in leading the prayers and the talks.

About 50 or so women and men, including Muslims, Christians and Jews, attended the jummah or traditional Friday service, listening to prayer leader Crystal Keshawarz chant the holy Arabic words, "God is great" or "Allahu Akbar."

The Koran does not directly address whether women can lead congregational prayer, according to many traditional Islamic scholars. Some argue the Prophet Mohammad gave permission to women to lead any kind of prayer, while others say that he meant to restrict women to leading prayer at home.

Still, many traditionalists do not believe a man should hear a woman’s voice in prayer.

“Men are conditioned to believe that women's voices are seducing and if they hear her voice they are pushed into an adulteress area,” Keeble said. “Men should think better of themselves. They are not animals.”

Mohammad Sarodi, former chairman of the Muslim Community Association in Santa Clara, California, said he would not attend prayers led by women.

Though Islam is not the only religion with a tradition of male leadership, it is a faith that many non-Muslims, and even some within the faith, view as unwelcoming or even hostile to women.

“It’s simply time” for change, Keeble said, both to bring more women into the faith and to alter the perceptions of those who feel that Islam was oppressive to females.

“I think this is the only way that reputation can be addressed - by empowering women,” Keeble said.