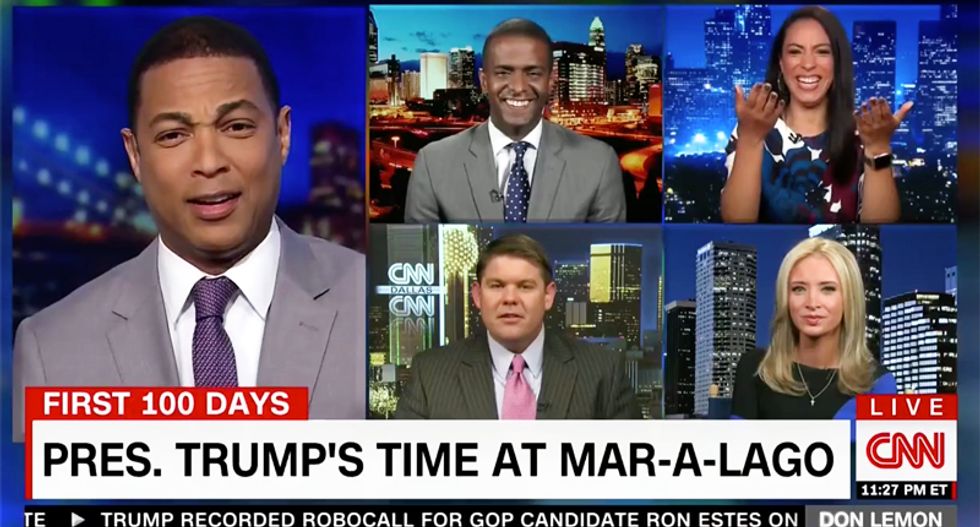 During a CNN discussion on President Donald Trump's obsession with flying off to his Mar-a-Lago resort every weekend to play golf -- at tremendous expense to taxpayers -- conservative Ben Ferguson attempted to mount a defense as the whole panel laughed at his feeble excuses.

"We crunched the numbers and found that president has spent six weekends and a total of 21 days at Mar-a-Lago, the total cost of those trips around $21.6 million," host Don Lemon recited to kick off the discussion.

"Just for pure numbers sake," CNN contributor Bakari Sellers chipped in, "in the first 81 days of office, President Obama went to the golf course course zero times. Let's talk about the fiscal accountability or lack thereof and the fact is Trump is on a pace to spend more money traveling in his first year," Sellers continued before Lemon cut him off.

"We heard so much from Donald Trump about President Obama going to the golf course and playing and look that: 17 times,  Obama zero times," Lemon explained. "If you don't see the hypocrisy in that then you don't want to see it and you're blind."

Turning to conservative Ferguson, the CNN host asked him to defend it.

"Three points here. One, what has the national debt done under the spending under this president? Has it gone up or has it gone down?" Ferguson offered as the panel as a whole rolled their eyes and began laughing.

"We're talking about golfing and going to your vacation home," Lemon replied in an attempt to get back on topic.

"When he was in Mar-a-Lago just a few days ago, was he not with one of the biggest leaders of the world and were they not spending time talking about North Korea and were they not doing it while they were playing golf?" Ferguson asked.

"He can't do that in D.C., Camp David?" a smirking Lemon shot back.

"When you go down there and you meet and spend quality time playing golf with a world leader, there is a relationship being built," Ferguson tried again as Lemon suggested, "They should build some golf courses in Washington D.C. Maybe they should build golf courses at Camp David."

"You're acting as though the weather in Florida is the same as Washington D.C., "Ferguson tried again.

"Your golf clubs don't work in the cold," Lemon dryly remarked before calling out Ferguson.

"You can never criticize -- we show the tape of the president being hypocritical and you go, 'no he's not.'" Lemon lectured. "You can't even acknowledge it and you have no credibility when you do that."