CNN’s Alisyn Camerota stumps senator by asking if he understands Trump’s Syria policy: No, do you?’ 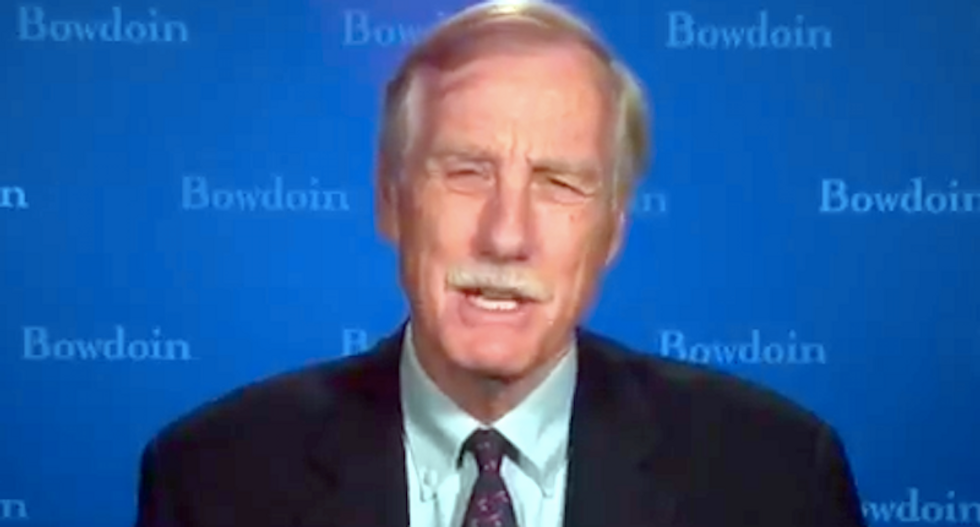 Sen. Angus King (I-ME) has no idea what President Donald Trump's policy is on Syria — and he's not sure anyone else does either.

In a Monday morning interview with CNN host Alisyn Camerota, King was asked if he understood the U.S. policy.

"No. Do you?" King asked Camerota. Though he admitted he didn't know the Obama policy either. "This is a complex situation. If there is going to be further involvement -- by the way, I think it would be a mistake. By the way, to tell you how complicated it is, there are 1,200 opposition groups to Assad. ... groups vying for power and trying to overthrows Assad... From moderates way over to ISIS and Al-Nusra Front. It is a complicated situation. But, if we try to go in with troops, some people have advocated that, I think that is a huge mistake. ISIS wants to bog us down in a land war, if you will, in Syria."

Camerota also asked King what the bombing was supposed to accomplish.

"When we had experts on Friday morning before the damage known to the air base, they said 'One of the things you would do if you wanted to stop future attacks on civilians, is you'd crater the runways.' That debilitates the airport. You can't launch future missions from there. That's not what the U.S. did with those 59 tomahawk missiles. And then, President Trump talked about that. He tweeted: 'The reason you don't generally hit runways is they are easy and inexpensive to quickly fix, fill in and top.' That's different than what so many of the military experts said. And then, basically, the day after the U.S. missile strikes, Bashar al Assad was back at it and launching more strikes on civilians. What did it accomplish?"

King said that he wants to opt for a "wait and see" approach and if they launch another chemical weapon then it was "ineffective and didn't send the proper message."