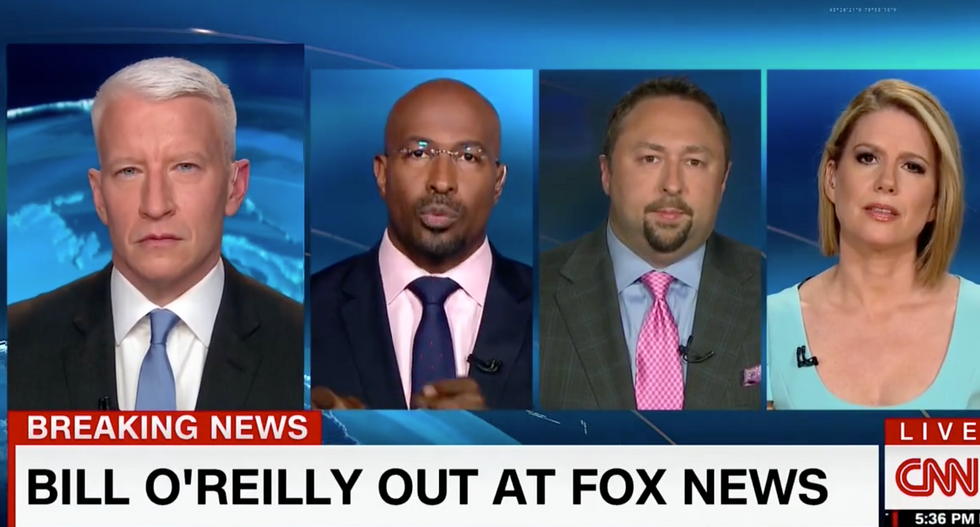 CNN’s Van Jones on Wednesday railed into Donald Trump for supporting Bill O’Reilly, arguing the president “has egg all over his face” for once suggesting the ousted Fox News host shouldn’t settle his multiple sexual harassment suits.

"I’ve been sitting here just squirming trying to hold it in,” Jones said when asked by CNN’s Anderson Cooper to react to O’Reilly’s firing. “First of all, I have to point out that in any normal situation, Donald Trump has egg running down his head, his chest, his leg. He came out and said, ‘This guy’s great, he’s never done anything wrong.’”

Van Jones pointed out that payouts to victims of O’Reilly’s abuse essentially became the “cost of doing business” at Fox News.

“The President of the United States put his name behind this guy’s name,” Jones said. “That’s terrible.”

Former Trump campaign communications adviser Jason Miller countered that Jones’ characterization was “overblown,” arguing the “voters decided this [and] the president got 306 electoral votes” despite accusations against him.

“There was a video tape, sir, of the president talking about grabbing someone by the vagina," Jone replied. "That was not an accusation against him. You guys keep saying the same thing every time. It doesn’t work anymore.”

Jones argued Trump boosters always fall back on two talking points. “Number one: it’s all fake news," Jones said. "That wasn’t wake news. And number two, just because he got a bunch of votes, nothing now can stick to him. It’s just not true.”

“Why didn’t Hillary Clinton win the votes,” Miller shot back.

“If your only argument isn’t about his character, it’s not about who he is … You want to talk about an election from November, you’re not getting the point.”

Miller argued there are “two separate issues” at stake, the accusations against O’Reilly and the “unfounded attacks against the president.”

“If they’re two different issue then why did Trump put himself on the line and associate himself with O’Reilly?” Jones asked, later arguing the president “thinks this sort of behavior is okay.”

Miller countered that the president was referring to his personal experiences with O’Reilly, saying the former Fox News host has always been professional with Trump.

“What does that have to do with anything?” Kirsten Powers jumped in, recalling when Trump defended Ailes because “he’s friends with him.”

“What on Earth is he talking about?“ Powers asked. “Why would how he treats you, another man, have any bearing on how he interacts in private with a woman?"