'Does he want me to stop buying his products?’: Jake Tapper calls out Trump’s ‘Buy American’ hypocrisy 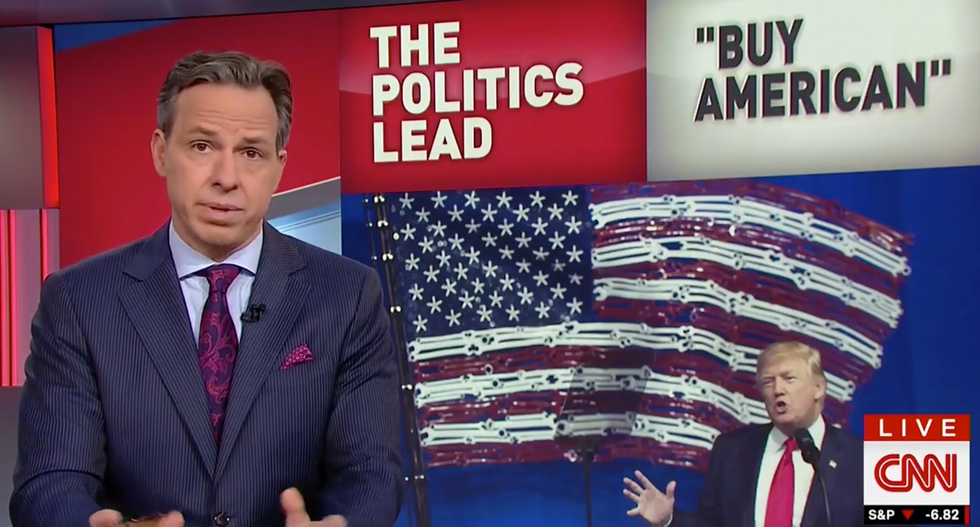 Trump signed the order in Wisconsin on Tuesday, which directs a series of federal agency reviews—though does little to directly impact policy. The president said the order aims to identify where the government can “aggressively promote and use American-made goods.” It also directs federal agencies to reform the H1-B visa laws, which allow companies to bring in highly skilled foreign workers.

At the onset of “The Lead” Tuesday, Tapper pointed out that while Trump’s “Buy American, Hire American” order sounds like a step in the right direction, the president’s own business practices directly contradict the order’s intent.

“The president just signed an order to ‘buy American,” Tapper said. “So wait, does that mean he wants me to stop buying Trump products?”

‘“It’s time,’ the president said today, repeatedly assailing cheap subsidized and low-quality foreign goods,” Tapper continued. “It’s an important issue. It’s one I asked then-candidate Trump about in June 2015 because of course, many Trump corporation products are not made in the U.S. Far from it.”

“As for hiring American, a CNN review found that the president as a corporate head has hired more than 1300 foreign guest workers to work at his various businesses here in the U.S., including requesting 78 visas to staff his two Florida properties for this year,” Tapper added.

Watch the take-down below, via CNN: