‘Get off of Twitter’: Supporters grumble in discontent as Trump hits Day 100 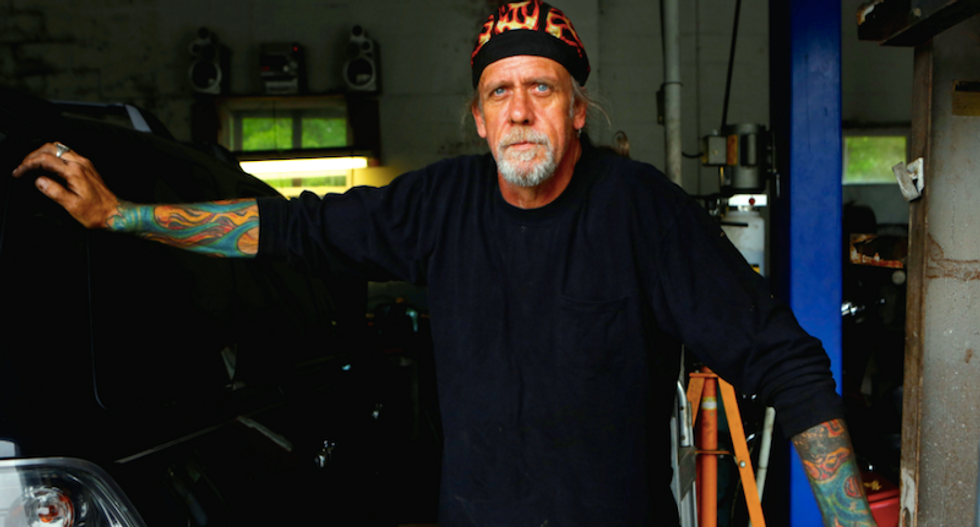 Tom Moyer, 50, speaks about the current U.S. President in the county which flipped from voting for Barack Obama in 2012 to backing Trump in Gates County, North Carolina, U.S., April 24, 2017. (REUTERS/Julia Rendleman)

Some of his supporters fret that President Donald Trump is backing himself into a corner with promises that can’t be kept. Others lament he is not pulling America from international conflicts as he vowed – or say he should “get off of Twitter.”

Those grumbles are early warning signs for Trump as he marks his 100th day in office on Saturday.

They were heard in Reuters interviews with Trump supporters in “swing” counties that went for Democrat Barack Obama in 2008 and 2012 but then flipped for Trump last year – a slice of the electorate dominated by white voters that is crucial to the Republican’s re-election hopes and that Democrats want to win back.

What reporters found this time in more than two dozen interviews is that Trump voters are largely standing with their man but with signs of restlessness, mainly over foreign policy, concerns over getting legislation through Congress and some skepticism that he won’t be able to follow through with promises – from building a wall along the Mexican border to repealing Obama’s signature healthcare law.

But rather than bash Trump, many largely blamed Democrats and Republicans alike, a fractured Congress, the federal judiciary, and what they see as a hostile news media.

They showed a willingness to trust the president almost implicitly, saw him as a tireless worker, and appreciated his efforts to secure the border and curb immigration. They had little interest in the in-fighting between his senior aides in the White House.

“Maybe sometimes I question what’s going on,” said Karen Mayer, 47, an attorney in Clearwater, a west coast Florida city in Pinellas County, where the majority of its 500,000 voters went for Obama in 2008 and 2012 but then flipped for Trump last year. He prevailed over Democratic challenger Hillary Clinton by slightly more than 1 percent of the vote there.

“But at the same time, I have faith that he has a strong team,” Mayer said.

In a statement touting Trump’s record in the first 100 days, the White House highlighted, among other things, his attempts to streamline government by proposing a lean budget, and his aggressiveness in foreign affairs, particularly with regard to challenging Russia and Iran.

Trump also said that being president has turned out to be harder than he expected.

If Trump has reason to worry about his re-election prospects, it should be because of supporters like Brian McCann, 48, who owns a real estate firm in Northampton, Pennsylvania. “I think he’s finding out that he can’t follow through on all his talk,” he said. “Internationally, I think he’s creating more tensions than solutions.”

That was the main reason that Holly Peseski, 46, a legal assistant in Mt. Clemens, Michigan, graded Trump’s tenure as a “B-minus” so far. “I don’t like the recent bombings he’s done,” Peseski said, referring to U.S. missile strikes on a Syrian airfield and a huge bomb dropped on a militant hideout in Afghanistan. “He was a little too quick to act."

Peseski had another complaint about Trump: “I wish he’d get off of Twitter.”

'Not picking up new supporters'

The counties Reuters visited reflect the rural, suburban and largely white coalition that carried Trump to the White House.

Trump was able to flip these counties and dozens more like them powered by an enthusiastic voter base that included many people who had not cast ballots in years, as well as some Democrats who crossed over largely because of their dislike of Clinton.

An analysis of Reuters/Ipsos polling data shows slippage in Trump's approval ratings, with lower enthusiasm among white men without a college degree, the core of his political base.

In comparing Trump’s approval rating in the first 20 days of his tenure to a 20-day period in April, Reuters also found a rise in disapproval among independents, college-educated adults, people with below-average incomes, white women and white Millennials.

Those women voters were important to Trump’s victory. He beat Clinton 53 percent to 43 percent among white women, who comprise 37 percent of the electorate. In Pinellas County, for instance, white women are by far the largest demographic among its more than 275,000 registered voters. Trump beat Clinton there by a little more than 5,000 votes.

David Jolly, a former Republican congressman who lost his Pinellas-based seat in November in part, he said, because of his criticism of Trump, has seen few signs that the president’s support is fading, but at the same time, “he’s not picking up new supporters.”

Trump’s overall approval rating in Reuters/Ipsos polling has declined steadily over the past two weeks and is now at its lowest level since he took office, with 40 percent of Americans now approving of his performance in office.

Some voters interviewed in the swing counties identified the struggling effort to replace Obama’s healthcare law as an early worry about Trump.

Walter Watson, 62, a retired art teacher in Gatesville, a town of about 320 people in rural Gates County, North Carolina, said he did not like the way Trump and Republicans tried to rush through a new healthcare plan without giving it what he thought was proper consideration.

“You got to be careful, because this is a life and death issue for a lot of people,” Watson said.

His sparsely populated county backed Obama with 52 percent of the vote in 2012, but Trump won it with 53 percent in 2016.

Congress is the biggest hindrance to Trump's success, many of those interviewed said.

“I don’t think he’s going to be able to do even half of what he claimed,” said Bob White, 71, a retired finance worker in Clinton Township in Michigan. “I don’t think Congress is going to go along with him."

But even as they express skepticism that Trump can achieve all of his campaign promises, his supporters are sticking with him for now.

“I think he’s trying,” said Watson. “But he probably overstated what he could do, because even a president has limits.”