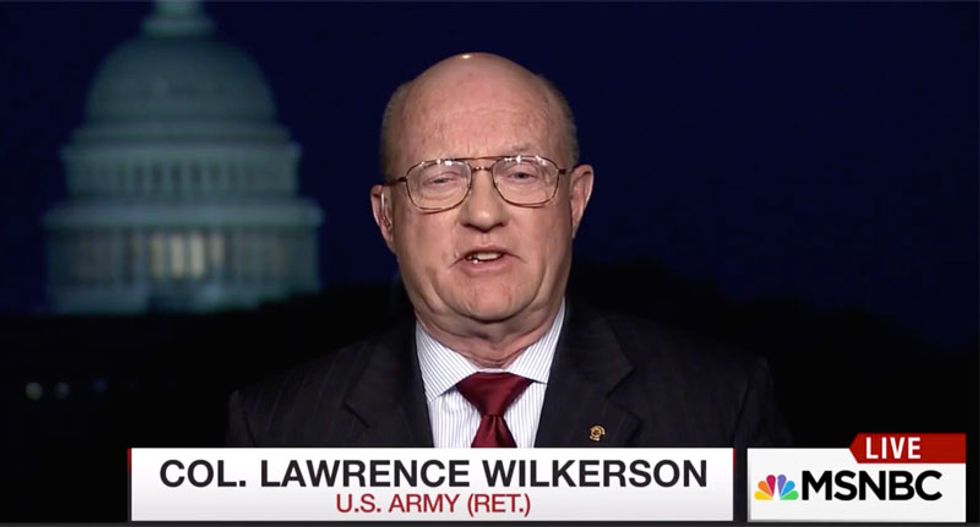 Appearing on MSNBC's All In with host Chris Hayes, former chief of staff to Secretary of State Colin Powell observed the chaos at the White House and commented that an administration having difficulty pulling together the annual White House Easter Egg Roll is not capable of handling Russia or Syria.

With White House Press Secretary Sean Spicer under fire for his comments about Hitler, and the White House scrambling to pull together the annual event next week, retired Col. Lawrence Wilkerson said the Trump administration is full of "rank amateurs."

"Let's start with the Hitler comment," Hayes began calling it "clumsy" before adding, "What was striking is that this was pretty clearly a talking point. The president himself in interviews talking about the worst mass murderers haven't used chemical weapons in this way, which is the kind of rhetoric you normally association with justifications for escalation into a military conflict."

"I'm very concerned by that very aspect of it," Wilkerson replied. "Let me just say that I think Sean Spicer is kept around because he makes Donald Trump look good. I wouldn't expect him to depart on that basis alone. The White House is looking so bad that Sean Spicer actually makes our president look good."

"With regard to some of the remarks about the more visible threats in the world, North Korea being preeminent perhaps right now, from what Secretary of State Tillerson has said, from what the president has said, from what allegedly transpired in Florida with President Xi, I see so much rank amateurism at work here," Wilkerson continued.

"Just your remarks about the Easter ceremony and no one being notified, it's clearly indicative of a White House that not only is low on people, it's low on experience and talent," he stated. "They can't seem to even manage the grounds of the White House, let alone such significant issues as Russia and Syria and North Korea and on and on."