France goes to the polls in presidential nail-biter 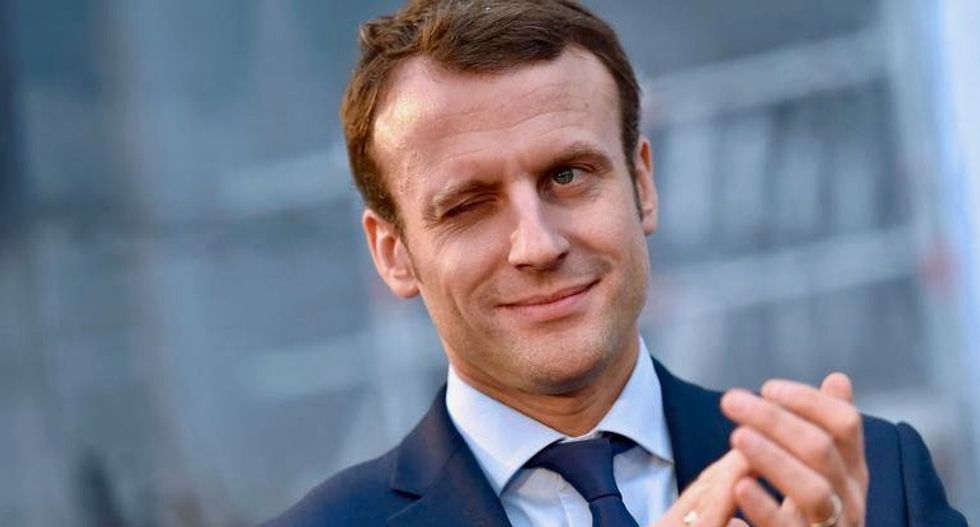 France voted Sunday under heavy security in the first round of the most unpredictable presidential election in decades, with the outcome seen as vital for the future of the beleaguered European Union.

Far-right leader Marine Le Pen and centrist Emmanuel Macron are the favourites to progress to a run-off on May 7 but the result is too close to call in a deeply divided country.

Le Pen, the 48-year-old leader of the National Front (FN), hopes to capitalise on security fears that were catapulted to the fore of the campaign after the fatal shooting of a policeman on Paris's Champs Elysees avenue claimed by the Islamic State group.

Aiming to ride a wave of populism that carried Donald Trump to the White House and led Britain to vote for Brexit, Le Pen wants France to abandon the euro and intends to call a referendum on withdrawing from the EU as well.

Observers predict that a Le Pen victory could be a fatal blow for the EU, already weakened by Britain's vote to leave.

Macron, 39, is seeking to become France's youngest ever president and has campaigned on a strongly pro-EU and pro-business platform.

Seeking to benefit from a worldwide move away from established political parties, the former banker and economy minister formed his own movement, "En Marche" ("On the Move"), that he says is "neither to the left nor to the right."

But polls show scandal-tainted conservative candidate Francois Fillon, a former prime minister, and hard-left firebrand Jean-Luc Melenchon are also in with a fighting chance of finishing among the top two candidates and reaching the all-important second round.

Le Pen cast her ballot in Henin-Beaumont, a former coal mining town in northern France that has an FN mayor.

Macron voted in the chic Normandy seaside resort of Le Touquet with wife Brigitte, his former high school teacher who is 25 years his senior.

Four hours after voting stations opened, turnout was up slightly on the figure at the same stage in 2012, suggesting it could beat the final figure of 79.48 percent in that election.

Nearly 47 million people are eligible to vote and most polling stations will close at 1700 GMT with those in major cities shutting an hour later. First projected results are expected shortly afterwards.

In the wake of the policeman's killing on Thursday, 50,000 police and 7,000 soldiers have been deployed around France to protect voters.

The terror attack was the latest in a bloody series have cost more than 230 lives since 2015.

Guy Belkechout, a 79-year-old pensioner who was voting in the working-class Parisian suburb of Trappes, said he was concerned.

"Security issues have influenced me after the attacks. Candidates who want fewer security measures, who want to reduce the police's powers, have not got my vote," he told AFP.

But Yanis Olive, a 35-year-old photographer voting in Paris, said security was not "a major issue" -- unemployment and the economy were more important.

"Emmanuel Macron's youth and positive demeanour is attractive," he said. "I really don't want Fillon or Le Pen so I've chosen Macron because I think he is going to be in the second round."

Analysts believe the attack so late in the campaign could hand an advantage to candidates seen as taking a hard line on security issues.

"If it were to benefit someone, that would clearly be Marine Le Pen who has dominated this issue throughout the campaign, or Francois Fillon," said Adelaide Zulfikarpasic of the BVA polling institute.

In the aftermath of the shooting, Le Pen called for France to "immediately" take back control of its borders from the EU and deport all foreigners on a terror watchlist.

US President Trump tweeted that the shooting "will have a big effect" on the election.

Closely watched around the world, the French campaign has been full of unpredictable twists and turns.

A race that began with the surprise nomination of Fillon as right-wing candidate in November shifted into a higher gear in December when unpopular Socialist President Francois Hollande decided not to seek re-election.

Hollande's five years in office have been dogged by a sluggish economy and the constant terror threat.

After voting in Tulle, central France, Hollande said "democracy is stronger than all else", in a reference to the Paris attack.

Fillon was the early frontrunner until his support waned after he was charged following accusations he gave his British-born wife a fictitious job as his parliamentary assistant for which she was paid nearly 700,000 euros ($750,000) of public money.

Though there are four main contendersin the election, a total of 11 candidates are taking part.

The candidate for the governing Socialists, Benoit Hamon, was a distant fifth going into the final weekend.