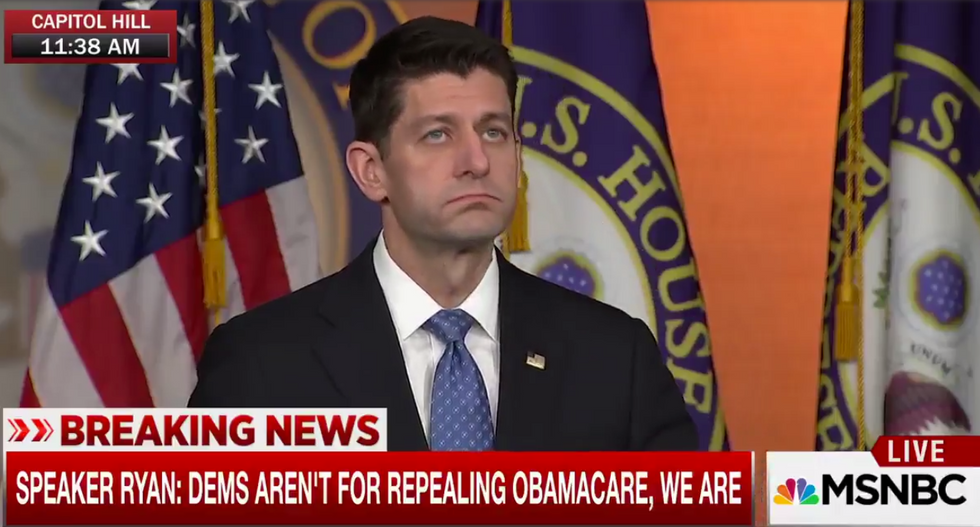 A meeting Wednesday evening between top White House staffers and House Republicans derailed into heated back-and-forth after aides to Donald Trump hinted that Speaker of the House Paul Ryan’s leadership may be in jeopardy if he’s unable to pass an Obamacare replacement bill, Politico reports.

"It was really bad," one person familiar with the meeting told Politico. "They were in total meltdown, total chaos mode.”

The meeting was described as “tense” after White House Chief of Staff Reince Priebus signaled Ryan’s speakership may be on the line if the GOP fails to push through its long-promised plan to repeal and replace the Affordable Care Act. Three sources familiar with the meeting told Politico it was made clear that Ryan is not the only House Republican whose job is on the line.

According to the report, Trump officials, including Steve Bannon and Jared Kushner, joined Vice President Mike Pence and Priebus at the meeting, urging Ryan to vote on a bill before an upcoming recess. They also pushed the House Speaker to accept changes that would make the GOP replacement plan more appealing to conservative House Republicans, including members of the House Freedom Caucus.

The American Health Care Act, The GOP’s first attempt to repeal and replace Obamacare, ended in a humiliating defeat last month after it became apparent the House did not have enough votes to push the bill through. Trump had previously issued an ultimatum to House Republicans, telling them to pass the AHCA or he would move on from pursuing a healthcare repeal plan. The following week however, the White House and Congressional Republicans signaled a repeal of the Affordable Care Act was back on the agenda.

Looking to avoid another dramatic upset, the speaker told White House staffers the bill was not ready.

According to Politico, the White House has “lashed out at House GOP leaders in recent days” over the lack of progress on the healthcare front. In a statement Thursday, a spokeswoman for Ryan denied the mounting tension.

“The president and the speaker had a very good, long conversation last night and they remain fully on the same page on the path ahead,” AshLee Strong said.