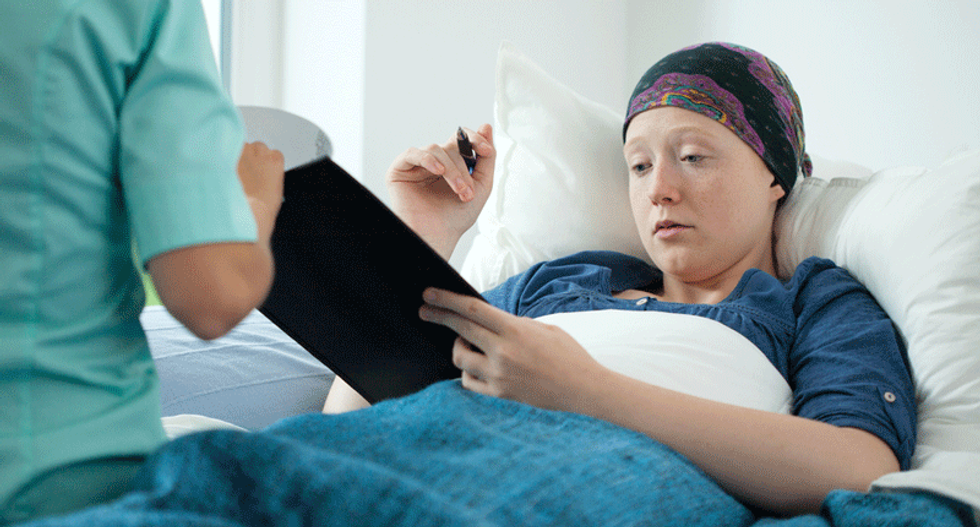 Young woman with cancer signing documents in a hospital (Shutterstock)

The U.S. government's costs could increase by $2.3 billion in 2018 if Congress and President Donald Trump decide not to fund Obamacare-related payments to health insurers, according to a study released Tuesday by the Kaiser Family Foundation.

The payments amount to about $7 billion in fiscal year 2017 and help cover out-of-pocket medical costs for low-income Americans who purchase insurance on the individual insurance exchanges created by the Affordable Care Act, often called Obamacare.

Trump has threatened to withhold the payments to force Democrats to the negotiating table on a healthcare bill to replace Obamacare.

He has also said he will fund the subsidies if Democrats agree to funding for his proposed border wall with Mexico as part of efforts to pass a government funding bill this week and avert a shutdown. Democrats have rejected the conditional offer.

If no deal is made, parts of the federal government will shut down at 12:01 am on Saturday.

The payments are the subject of a pending Republican lawsuit that was appealed by the Obama administration and put on hold when Trump took office.

The government could save $10 billion by revoking the payments, Kaiser said. But insurers that remain in the market would have to hike premiums nearly 20 percent to cover their losses, Kaiser found, so the government would have to spend $12.3 billion on tax credits to help pay for Americans' premium costs - a net increase of 23 percent on federal spending on marketplace subsidies.

The projection assumes that insurers remain in the marketplace next year. Health policy experts have said without the payments, many insurers could not afford to stay in the market and will likely exit, which would leave some U.S. counties without an insurer.

Aetna , UnitedHealth Group Inc and Humana have already exited most state exchanges for 2017 and said they will do so next year as well.