Has Trump launched the next great American catastrophe in the Middle East? 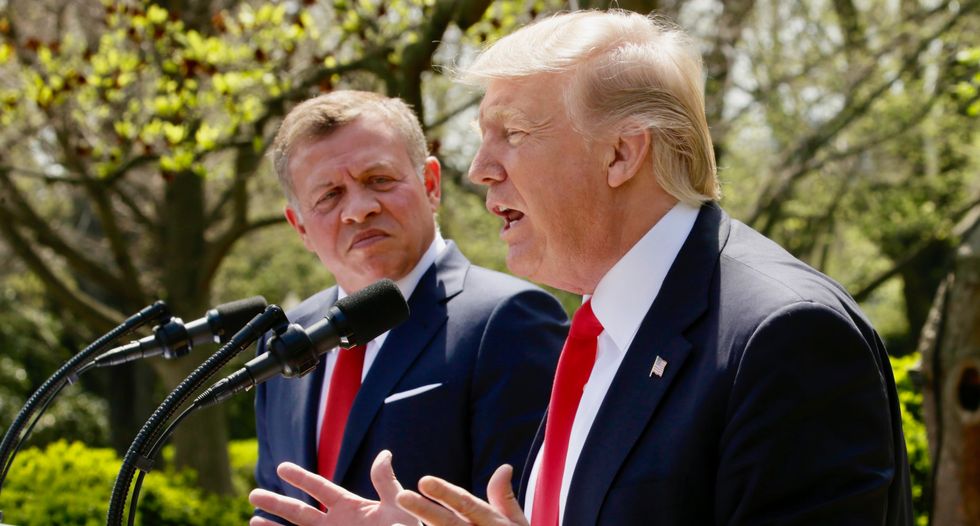 U.S. President Donald Trump speaks as Jordan's King Abdullah listens as they hold a joint news conference in the Rose Garden after their meeting at the White House in Washington, U.S., April 5, 2017. REUTERS/Kevin Lamarque

President Obama, do not attack Syria. There is no upside and tremendous downside. Save your "powder" for another (and more important) day!
— Donald J. Trump (@Donald J. Trump) 1378560093.0

It was that rarest of occasions when Barack Obama and Donald Trump were thinking very much alike.

In September 2013, President Obama was besieged by demands to attack Syria over a ghastly chemical attack in the Damascus suburb of Ghouta that killed 1,500 people. Obama's logic tracked with Trump’s. There was no upside to attacking Syria, only a tremendous downside. Obama reached that conclusion by careful study of his options. Trump reached that conclusion by the seat of his pants.

Today President Trump faces much the same predicament as his predecessor, and has already ordered an initial military strike, launching 59 tomahawk missiles at a Syrian Government airbase. The imagery from the town of Idlib province where a Syrian government chemical attack killed at least 69 people is sickening. The calls for U.S. action are growing.

What is the upside of a unilateral U.S. military response? Punishing Assad the war criminal may be psychologically satisfying on some level. The airstrikes might deter him from using chemical weapons again. They also might not.

Trump is going to learn from this international crisis that there is no unilateral U.S. military action that can oust the Syrian dictator or change the balance of power on the battlefield ruins of his country. Despite Trump's bluster, you can’t “bomb the sh*t” out of your enemies.

Going to the UN Security Council to build international support for a military response or prosecution of Assad as a war criminal is a theoretical policy option. But it is not a real possibility under an administration that is hostile to the United Nations and the idea of multilateral cooperation.

Can Trump learn from the past?

With lemons for options, Obama chose to make lemonade. Instead of a unilateral missile strike, he let Secretary of State John Kerry work out a deal with the Russians to dismantle and remove Assad’s chemical arsenal. Between October 2013 and June 2014, some 1,300 metric tons of deadly weaponized poison gas were removed from the battlefield under international supervision.

That was a tremendous accomplishment. Imagine if Assad still had those chemical weapons. We might be seeing an attack like Idlib province every week. But it is small consolation when Assad is still in power and still willing to obtain and use chemical weapons.

Now Trump, like Obama, faces the very real limitations on what an American president can actually do. Trump said Wednesday that Assad’s use of chemical weapons crossed a line, in fact, “many, many lines.” He now faces the same dilemma as his predecessor: Is he going to enforce his impulsively drawn “line in the sand” with even greater U.S. military action?

Trump is addressing the issue with the help of a newly professionalized National Security Council. By ousting the armchair intellectual Steve Bannon, Trump has acceded to National Security Adviser H.R. McMaster. At least the president is getting advice from a professional, not a propagandist.

But the Syria options McMaster is presenting to Trump are likely to follow what Obama derisively called the "playbook."

“There’s a playbook in Washington that presidents are supposed to follow,” Obama told the Atlantic’s Jeffrey Goldberg. “It’s a playbook that comes out of the foreign-policy establishment. And the playbook prescribes responses to different events, and these responses tend to be militarized responses. Where America is directly threatened, the playbook works. But the playbook can also be a trap that can lead to bad decisions. In the midst of an international challenge like Syria, you get judged harshly if you don’t follow the playbook, even if there are good reasons why it does not apply.”

Trump faces a different situation than Obama did in 2013. The Syrian government has consolidated its battlefield gains. The rebels, led by Al-Qaeda and supported heavily by the Gulf States and Saudi Arabia, are in retreat. Syria’s allies, Iran and Russia, are not budging. Russia is defending Syria’s action, not very convincingly. Iran has strongly condemned the attacks, but will not attack Assad.

Trump has a political opening. But that would require him to restrain himself from further military action, and engaging in creative diplomacy, an activity he seeks to defund and downgrade.